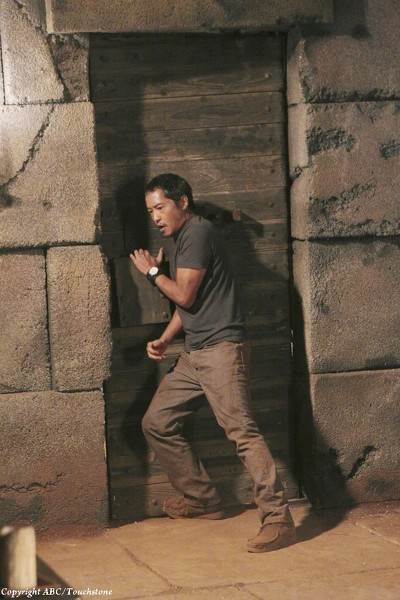 If you were like me, you probably were holding your breath during the entire final sequence of “Sundown,” in which Miles Straume (played by Ken Leung) was being chased by the Man in Black/smoke monster through the Temple. I was sure he was a goner, but miraculously enough he survived. After the episode was over, however, I chastised myself because I realized that Miles hasn’t really served a huge purpose on the Island, despite the fact that his character arc seems complete.

However, if you were worried that Miles will be biting the proverbial bullet soon, worry no longer: he’ll be around at least until the sixteenth hour of the season. Of course, all bets are off on who will make it through the finale, but at least until then, it’s safe to say that Miles is good to go.

In fact, it looks like he’ll be playing some role in the finale, along with Ben and Richard, both of whom make it to at least episode sixteen as well. Filming reports from DarkUFO show the following:

This is most interesting. Of course, it’s just as vague, but the fact that Miles has apparently been recruited by Ben and Richard to do something shows that Miles isn’t out of the race yet, and will at least have more of a role soon.

What do you think of this? Are you glad Miles will be around for at least nine more hours? Do you think he’ll make it to the end of the series? Let us know in the comments below.