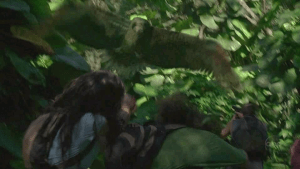 If you’ve been following LOST since it wrapped up on May 23, you surely know that the DVD and Blu-ray sets will be containing some scenes that we have never seen before. Michael Emerson (who played Benjamin Linus on the show) informed fans that the epilogue would take place after the events of the finale’s Island timeline, and would explore what happened to Hurley and Ben after Jack died and after Hurley took over as leader of the Island with Ben as his “number two.”

In a recent interview on The Lost Podcast with Jay and Jack, actor Jorge Garcia (Hurley) confirmed to the podcasting duo that the epilogue (which will run approximately twenty minutes) that the epilogue would be much more lighthearted than the finale was, and that it would also answer one of the biggest questions of the series since season two: the Hurleybird.

In the season two finale, “Live Together, Die Alone,” Jack, Kate, Sawyer, and Hurley were following Michael to the other side of the Island, where the Others were waiting to trade Walt for the four survivors. As they were walking, though, a giant bird erupted from the canopy and swooped down on them, screeching what sounded an awful lot like “Hurleeeeeey!”

“Did that bird just say my name?” Hurley asked, bewildered.

“Yeah, it did,” Sawyer replied. “Right before it crapped gold.”

Though the bird really only served the purpose of having Michael realize that his gun wasn’t loaded, it remained a mystery with fans for the rest of the series. Executive producers Damon Lindelof and Carlton Cuse often found themselves frustrated with fans’ preoccupation with the name-dropping avian, even though it had made two appearances on the show (once before in “Exodus, Part 2”). After receiving no new information about the bird for four years, fans were finally able to write it off as one of the weird, unsolved Island mysteries.