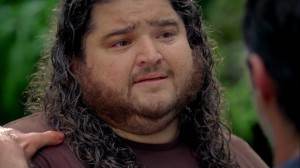 Now, as some of you might know, DarkUFO has posted a detailed synopsis of “The New Man in Charge,” LOST‘s eleven-minute epilogue that will be included on both LOST: The Complete Sixth Season and LOST: The Complete Collection. Seeing as this will probably be the last LOST spoiler ever released, I felt it appropriate to give you an alternative. A sort of spoiler-lite that gives you some idea but nothing that would really spoil it for you. So, as Spoiler Guy used to do, I’ve rigged up a little quiz game. There will be five questions, each with four answers. Some of those answers will be correct, some of them won’t. It’ll be a nice, healthy alternative to potentially ruining the final mysteries of the show for yourself.

1) ONE word isn’t mentioned in the vignette:

2) TWO of the following characters make a reappearance.

3) ONE of the following characters gives an apology.

4) TWO of the following mysteries are addressed:

5) Hurley tells Vincent that he:

Some of those might be easy to guess, and some of them might not. In any case, having read the synopsis, I have to say that the ending seems to be entirely satisfying, though I wish I had waited another month to see it. Would have been much better. However, there are some cool things happening that I can’t wait to see play out, and I’m utterly excited.

“The New Man in Charge” will be included on both the season six and complete series sets. If you want to pre-order the sets (due out on August 24), you can do so through here.