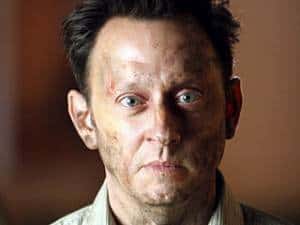 Last night’s synapse jolting dose of LOST ‘Dead is Dead’was a bumper crop for Ben Linus (Michael Emerson) fans swooning to find a silver lining in his otherwise storm cloud of behavior. Glimpse of humanity, or steps towards redemption? Genius writers Brian K. Vaughan and Elizabeth Sarnoff gave us an expose on Ben’s character that was uncompromising in the clarity of his constant deceptions, but also yielded a confusing glimpse into Ben’s human-after-all inner being; all the while robbing Ben ever so slightly of the foils of his child-hood transition to the dark side by introducing the convenience of smokey-induced amnesia.

Did Vaughan and veteran LOST scribe Sarnoff plant the seeds for redemption, or were they just transcending the monochromatic idiot-box dynamics of good and bad for the umpteenth, Peabody-award-winning time? Lest you doubt that Ben Linus is indeed the ‘˜E’in evil, we’ve prepared this list of Ben’s misdeeds to remind you why the beady eyed baddie is one of TV’s best villains, not a prince in frog skin.