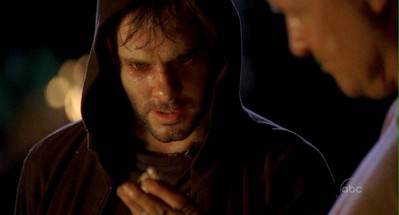 So much for a nonstop season.

LOST‘s sixth season might be losing a little bit of momentum as it approaches the show’s final batch of episodes. Episode fourteen of the season will not air on April 27 as previously expected. Instead, it will be pushed back a week and will air on May 4, two weeks after episode thirteen, which will air April 20. So what will be airing in that timeslot on April 27? No, it’s not some major event like the Olympics or a Presidential address. They’ll simply be replaying episode nine of the season, “Ab Aeterno.” I mean, sure, it’s a good episode, but do we really want to see that instead of a new episode? Of course not. Like Charlie (pictured right), we’ll be jonesing for a fix before those two weeks are up.

What this means for the last few episodes of LOST will actually be a series first, though. Episode 6.15 will air on May 11, Episode 6.16 will air May 18, and the series finale, episodes 6.17/6.18, will air on May 23, the Sunday following episode 6.16. This will be the first time we’ve had two episodes of the series aired within one week. Ironically, the episode which will have the most suspense attached to it will also have the shortest wait time of any episode.

It’s not the first time LOST has gone on hiatus midseason. It was a common occurrence during the first and second seasons. However the most excruciating wait came in season three, after which featured a painful break only six episodes into the season. I suppose we can be thankful that situation has been avoided since then, but don’t we have shorter seasons so we won’t have as many breaks?

I suppose it doesn’t matter that much, but the break will seem very unnatural as the series ramps up its final five hours. Whatever the case may be, I’m excited to see how these last few episodes play out. Who knows? Perhaps this scheduling change will make the cliffhanger at the end of 6.13 much more meaningful.