Home
LOST's Man in Black Gets a Name, and It's… 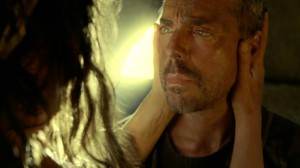 His name was left out of the show intentionally, but even the LOST producers couldn’t keep a bad man down. We first met the Man in Black in episode one of LOST, but we didn’t see him in his original form (Titus Welliver) until the season five finale, “The Incident.” Even then, we didn’t piece together that he was the monster until “LA X, Part 1,” when he finally spilled the beans to Ben. And when we saw his origin story in “Across the Sea,” we never got his name. Mother (Allison Janney) had apparently left him without a name.

No surprise there, but it is nice for some solid confirmation, which comes from the LOST Auction. A chair back for Titus Welliver is being sold, and it clearly lists him as “Samuel.” That’s the biggest confirmation you’re ever going to get. Kristin dos Santos claimed that this was the enigmatic villain’s name back in early June, but Darlton stated (and perhaps rightfully so) that revealing his name would take away some of the intrigue.

But no matter. Intrigue be gone, considering Samuel got shot in the back and kicked off a cliff, right?

So they’re the brothers, Jacob and Samuel. Giving him a name certainly adds quite a bit of depth to the story, in a way. It makes it more personal. More heartbreaking.

“Samuel” was also the name used for the original casting call for “The Incident” (for which Welliver was credited as Man #2), though casting call names are considered temporary and non-canon. The presence of the name on the back of a cast chair certainly gives the name a level of validity.

LOST will be coming to DVD on August 24, with a Complete Collection available in addition to the complete sixth season (all will be available on both Blu-ray and DVD).