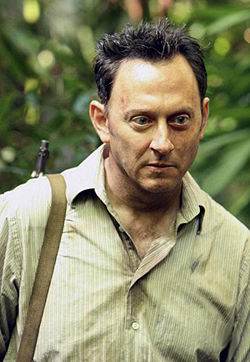 Ask any LOST fan and they will tell you. Michael Emerson has been robbed of an Emmys every single year since he snared his first nomination for the role of Benjamin Linus in 2007. This year marks Emerson’s third nomination for his work as LOST‘s uber popular bad-guy slash anti-hero, and could be his best chance at scoring Emmy gold.

LOST fans shouldn’t feel too bad for Emerson, though. The actor did nail an Emmy for his work on Boston Legal as the equally creepy William Hinks, although by comparison Emerson’s sinister-riffs have been polished to a fine art in the years since then.

Emerson’s start on LOST was originally as a guest role that was never supposed to extend beyond the middle of the second season. By the end of LOST season 2, though, Emerson’s character of Henry Gale had proved to be a hit with the fans and the instant-feedback from LOST’s gargantuan network of fan sites and forums helped inform the show’s brain trust that Emerson was worth holding on to. That has turned out to be a bit of an understatement.

On the subject of the recent nomination, Emerson was as humble as always telling RadarOnline ‘It is exciting, I was surprised. I thought they may have moved on to newer fresher looks. I am flattered someone is still looking at our show.’

As far as the effectiveness of his character, Emerson chalks up the success of Ben Linus to a minimalist approach that incorporates a little bit of himself. ‘I supposed over time, the more I play him, the more he is kindred to me. I won’t say I’m like him, but I guess I spent so much time playing him. It’s a little more obvious. He’s a good listener, and has a dry sense of humor. He doesn’t make rash decisions, so we have a number of things in common.’