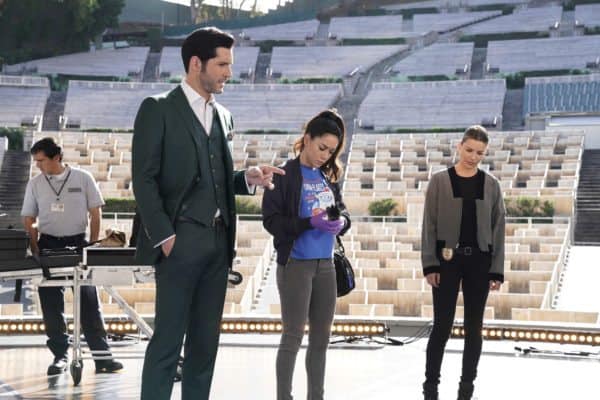 Some people are born to be in the spotlight. Others are less fortunate or that they’re lucky. On tonight’s episode of Lucifer, the Devil attempts to keep a certain detective out of his. That, and he channels his inner Kevin Costner as he becomes a singer’s bodyguard for the day. Charlotte also tries to resolve the conflict between Dr. Martin and Maze. Never thought I’d see the day.

The case of the week is when Jill, the backup singer for famous pop star Axara (guest star Skye Townsend), died from a firework to the abdomen. The latter was the intended target, but the singer switched places with Jill at the last minute without notice. I’d say she dodged a bullet or firework in this case. Then again, someone took an innocent life so Axara will have to live with it for the rest of her life. I hope that she doesn’t send herself downstairs if you know what I mean.

I give Lucifer props for trying to get Detective Decker away from dear old Dad’s radar, but his efforts were all for naught. Well, all except towards the end when he got himself stabbed in the chest with a knife when the killer turns out to be Cece, Axara’s assistant. He should never have pulled the knife out because having the detective near him makes him vulnerable and human. At least Detective Decker stopped the bleeding before the paramedics arrived.

Meanwhile, Detective Espinoza attempts to cheer up Lt. Pierce by having a heart-to-heart with him. Things were going sort of well when Amenadiel shows up at LUX. After some minor tension, the angel told Pierce/Cain that the latter needs to have faith. This piece of advice led the lieutenant/world’s first murderer to take a stab (apologies for the pun) at dating. He offered his company to Detective Decker when she told him that she doesn’t know who to take to Axara’s concert after the case was solved. I was this close to shouting at the television screen that she should take Lucifer since he kind of protected the singer while the case was still active. On the other hand, we still need the love triangle that drives a wedge between Deckerstar. I have a feeling that this won’t last for long cause Lucifer will eventually get the girl.

Speaking of cheering up, Charlotte helps Dr. Martin resolve the conflict between the latter and Maze. The demoness is still quite angry at the good doctor for what she did with Amenadiel. Dr. Martin defends herself by saying that she gave up her happiness for their friendship but Maze doesn’t want to hear it. She even broke the axe that Dr. Martin bought for her as a bury-the-hatchet gift. I hope that their friendship can be repaired someday. I have the utmost faith that it will.

The hour ended on an emotional note as Lucifer watched his detective head out of the precinct with Pierce/Cain. The former then went to Dr. Martin’s office close to tears and told her that he’s made a terrible mistake. I hate to say it, Luci-boy, but if you keep playing this game, you will end up losing your one chance at true happiness.

Seeing Lucifer turn down sex with Axara both amuses me and surprises me. Maybe deep down, he knows that Detective Decker is the only one for him. On the other hand, he still has a hard time believing that the feelings between the two of them are real.

The sing-off scene with Lucifer and Axara was perfect. The song choice of I Will SurviveÂ is excellent as it fits with the general theme of the episode.

Hearing Pierce sing Dust in the Wind while playing guitar was a sweet treat as well. Tom Welling has a decent voice. Perhaps Pierce could sing a duet with Lucifer if the opportunity presents itself?

I applaud the words that Axara said to Lucifer while she stayed at his penthouse. I can relate to them as I am in the process of chasing my passion.

Point of confusion: how did Lucifer get an extra microphone? Does LUX magically have them lying around somewhere for karaoke nights?

The hurt/jealous expression on Detective Decker’s face makes me want to give her an Ella hug.

When superstar pop singer Axara’s life is threatened, Detective Decker and Lucifer are thrust into the world of big-ticket stadium shows, crazed fans and divas as they catch the killer. Charlotte tries to help Dr. Martin and Maze repair their fractured friendship in this week’s episode of Lucifer.