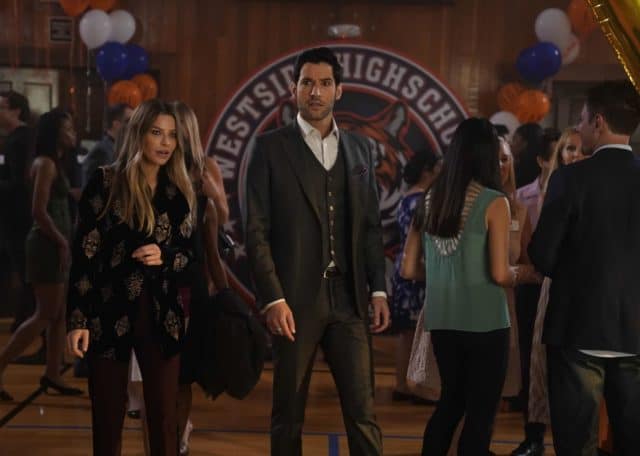 As a writer, I have often suffered from the infamous Writer’s Block. On tonight’s episode of Lucifer, it’s the Devil’s turn as our favorite crime-fighting duo go undercover at a local high school to flush out the killer of Kathleen Pike, a best-selling YA novelist.

The episode began with Detective Decker showing up at Lucifer’s penthouse. The dark, eerie feel of the scene screamed nightmare, but even with that fact in mind, my heart was still racing. It almost stopped when Detective Decker fell backwards off the balcony when Lucifer showed her his wings. He then tried to save her but couldn’t which led to him waking up and in Dr. Martin’s office. Maybe it’s someÂ kind of message from the Big Guy upstairs? If so, what does it mean?

The case of the week is intriguing to an extent. Deckerstar gets to go undercover at the victim’s high school. Detective Decker went as herself while Lucifer pretended to be Todd, the outcast nerd that no one wanted to hang out with. It reminded me of that episode of Bones where Special Agent Booth and Dr. Brennan went undercover at the latter’s high school to find the killer.

After some tedious questioning on both their parts, Deckerstar came up empty in the suspect department. Every single person, those who had characters based on them, had the same alibi for where they were two nights ago: They snuck into the school pool and had a poolside party. Though there’s one person, who did not get invited: Todd. So does this mean that Odd-bod Todd is responsible for Kathleen’s death?

On second thought, Todd is not the killer after all. He told Detective Decker and Lucifer that although he was at Kathleen’s house two nights ago, he did not kill her. The late author wanted to include Todd in her final book in the series and make him the hero. He said that the ending was grounded and he was genuinely touched by it. If Todd did not end Kathleen’s life, who did? Why the editor of course! Vincent Green argued with Kathleen over which ending to use in the final book. The former wanted to go with the robot ending written by a fan-fiction/ice-cream store manager named Ashley Collins while the latter wanted to go with the happier, normal ending. Green then threw Kathleen’s typewriter at her, causing her death.

Meanwhile, Amenadiel and Dr. Martin are trying keeping their relationship under wraps. Maze knew about their little secret obviously as seen in the last episode. The demoness then set up a blind date for Dr. Martin and Todd of all people while she and Amenadiel join them on a double date. The secret, in the end, finally came out. Maze is visibly upset that her friend had lied to her about having a relationship with Amenadiel. Dr. Martin then lashed out saying that she deserves to do something that makes her happy for once. Though after some self-reflection, the therapist decided to end things with the archangel so she can stop putting her friend through more emotional pain. Greatest. Friend. Ever.

I loved the ending of the episode. Lucifer gave Detective Decker a prom that she won’t soon forget. My little shipping heart swelled when Lucifer pinned the corsage on Detective Decker’s sweater. I’d thought that he would go all out, but less is indeed more as Deckerstar shared another dance to the song Only You by Yazoo. I wished that they would’ve kissed when Lucifer dipped the detective but the kiss-closeness is fine too. The Devil also overcame his version of Writer’s Block when Detective Decker told him that one could not rewrite history. Is Lucifer going to go back in time like Barry and Team Legends or does he have something else up his sleeve?

I rolled my eyes at the scene where Lucifer tried the “yes…and” improv technique when he questioned the editor. I’m sure that working the words “yes” and “and” into every sentence is not the correct execution of the method.

Loved the Train song Drops of Jupiter that played at the reunion. I sang along under my breath while watching the scene. Don’t make me sing in public though; I’m no BeyoncÃ©.

Also loved the bonding between Maze and Trixie. These two are adorable.

Detective Decker looks cute in a neon pink wig. As does Ella in her blue hair. Shame they won’t have their neon party.

The role reversal in this episode is intriguing. Usually, Lucifer is the irresponsible and fun one while Detective Decker does all the work and is the responsible adult. It’s nice to see the Devil be all by-the-book for once instead of throwing caution and the consequences to the wind. I have never seen him scoff derisively at female attention. Though to be fair, his determination read the afterword might be a factor.

Proud moment: Detective Decker binge-reading every single novel of Kathleen’s YA series. I may not be a published author (in terms of a book), but it was a proud moment nevertheless.

Lucifer and Chloe infiltrate a high school reunion to catch a best-selling YA novelist’s murderer. Amenadiel and Linda struggle with making their relationship public and suffer the wrath of Mazikeen Smith on tonight’s Lucifer.