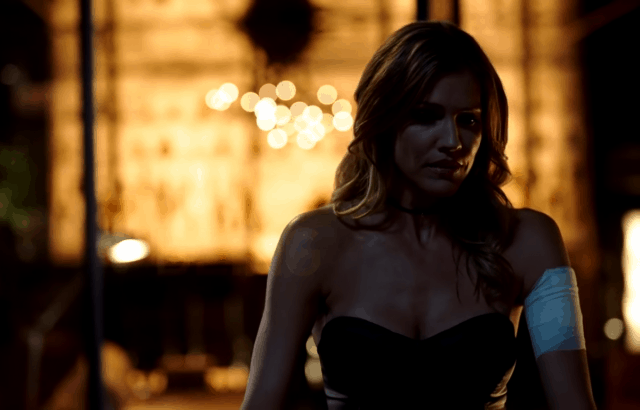 It’s all about Mommy Dearest in this week’s episode of Lucifer. Our favourite Devil tried to call Amenadiel to take their Mother back to Hell. The downside to that is that it doesn’t seem to work. Maybe the archangel should consider therapy like Lucifer did with Dr. Martin. If it works for the Devil, it can work for an archangel, yes? I laughed when Lucifer tried calling for his angelic brother again in Ella’s lab, saying “is this thing on?”. Oh, show, you amuse me greatly.

My amusement continued when Lucifer dragged his Mom out from the hotel room where Charlotte Richard’s body was at the beginning of the episode. When Charlotte/Mama Morningstar stripped off her clothes and Lucifer looked away; I was positively giddy. The Devil has been scarred for eternity #LOL. Maybe now Lucifer will learn to appreciate women rather than try to bed every single one of them. Also, letting your estranged mother borrow clothes from a demon bartender is a terrible idea.

The part where Detective Decker and Detective Douche (I’m just going to keep calling him that) interrogated Trixie about the destroyed doll made me chuckle. It seems that the Devil is rubbing off on the little girl. Speaking of Lucifer, it was rather sweet of him to buy Trixie that new doll she wanted, but I have to agree with Detective Decker on the fact that children need to learn that just because someone else has something new, doesn’t mean that they can manipulate their parents to give them what they want.

After getting Mom back to the penthouse, I wanted Maze to start torturing her. I have a feeling that Mama Morningstar has something big planned and she has to be stopped before she can put that plan into action. Then Mama Morningstar turned the tables on Maze and headbutted her before escaping from the penthouse. Mazikeen, I thought you were better than to let someone like Mama Morningstar fool you. Tsk tsk.

I was kind of shocked at all the cheese Mama Morningstar bought with Lucifer’s credit card (how did he manage to get one I will never know) and made that burnt Mac n’ Cheese casserole at the end of the episode. That and the smirk Lucifer had when he watched Detective Decker take down the lawyer who tried to stab his Mother is a clear sign that he’s in love with her. That’s just my observation, though, think of it what you will.

The scene where Lucifer tried to help Mr. Richards with his wardrobe was hilarious. Who died and made the Devil a fashion expert? Sure he’s always dressed to impress, but come on! He’s not exactly someone one would go to for clothing advice! I burst out laughing when Lucifer opened theÂ suit protector and got a face full of cocaine. Priceless! That and the part where Ella called Lucifer “Luce” and added the “ifer” at the end when she thought he didn’t like nicknames.

It was also interesting to know that it was Mama Morningstar who sent Lucifer to Hell instead of God. Though I have a hard time believing her. I just don’t trust her. My heart went out to Lucifer though when his Mother said all those things to him. I still think that she’s trouble. Lucifer, you better watch your back cause I have a feeling that your Mother is out for revenge. I’m also worried about Amenadiel. He is losing the feathers on his wings, and there’s no clear explanation as to why that is. Explain show, now!

Mama Morningstar spends her first day on Earth in a new human body as Lucifer deals with his Mommy Issues in tonight’s Lucifer.