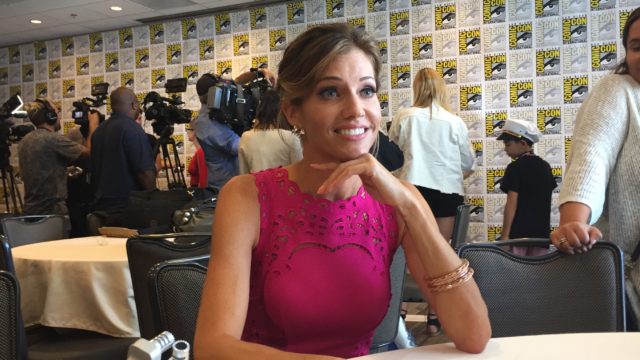 If you were expecting to see the Goddess of All Creation back on Lucifer, you’ll be waiting a long time. Tricia Helfer just roared back onto the scene for Lucifer’s third season. This time around, instead of playing the mother of the devil, she’ll be just another human. As Helfer tells TVOvermind, “She’s human, and I joke that I got demoted. Just a little hit to my ego.” At least she’ll be a human with one hell of a story, hell being the operative word.

Helfer very much enjoyed Charlotte’s powerful return to the scene this week, particularly her effect on Lucifer’s “I’m the devil, accepting who I am” attitude. Charlotte puts that to a halt. In that sense, both women show their strength. Ultimately, Charlotte 1.0 is very different from Charlotte 2.0’s ‘Mom’, and Helfer has had to play very subtly with the shift. “Mom had a little bit of a grandiose nature about her. Maybe a little inflection in her voice, or how she moved, or the way she would be with people since she detested humans. Charlotte won’t have that. Charlotte will be more be down to Earth.” We saw a little bit of that grounded attitude in Charlotte’s struggle to regain control of her sanity, in the wake of the damage ‘Mom’ did to her life.

Still, Charlotte was actually in hell the entire time ‘Mom’ was in her body, and that takes a toll on a person. Lucifer’s guiding hand is there for Charlotte, “Because even though Charlotte was not necessarily the best person prior, he realizes that she’s struggling, and it’s certainly not her fault that Mom took over her body.Â Charlotte’s been given a second chance, but she doesn’t know it.” Simply put, Charlotte is on a mission to change her fate so that she never has to go back to hell. Because of her guilt by association with so many ruthless clients, Charlotte will be getting a new job this season to go with her new lease on life. This will put her back in contact with all of the people ‘Mom’ interacted with, but it is Charlotte who will have to atone for much of the celestial being’s behavior. Yet it isn’t Lucifer who will be the biggest influence in her life. That unwilling honor goes to Ella, who was the one person who noticed the “darkness” in Charlotte, and perhaps, a certain pint-sized swearer who only knows how to speak the truth will help as well.

However, don’t expect Charlotte to be as involved in the season’s more celestial events as she did last year. She knows nothing of that part of her missing time, and that is something Helfer likes because it feels more relatable. “This season is really big about the characters’ identities, and that’s definitely the case for Charlotte. She is a shark attorney, extremely good at her job, a little cold, but has always flirted with the moral line. By the end of the episode [‘Welcome Back, Charlotte Richards’], she realizes that she has to make some changes; and so throughout the season she keeps trying to be a better person. But you are who you inherently are. She struggles where she thinks she’s doing better, but she hasn’t fundamentally made changes. There’s going to be lots of peaks and valleys for her this season, but she’s going to be a character people can relate to. They might not have a 4-month blackout like she did or have gone to hell and back, but she’s trying to do better in her life.”