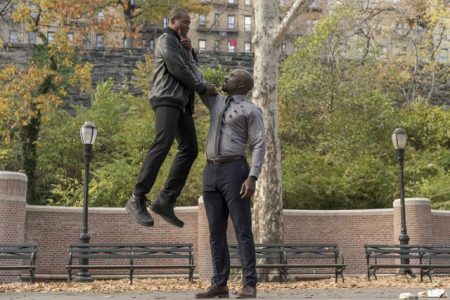 The fifth installment of Luke Cage was just alright. I agree with Randy, it has a tendency to repeat itself unnecessarily. Especially with scenes of Cottonmouth watching singers. I’m beginning to wonder if they’re just plugging artists. I thought this was a super hero show, not Empire. I love Empire, but there’s a time and a place.

Overall, the episode contains a few pretty funny scenes of Luke running around Harlem solving petty theft issues. To be frank, they’re mostly his fault anyway. Those scenes read like a video game mission. Luke eliminates a number of cronies before standing off with the boss himself. Even that scene felt so Final Boss to me. Luke takes out a number of henchmen, and then Cottonmouth comes down to Luke’s level. Too bad for Cottonmouth that he really doesn’t compare to Luke at all. He’s not a very threatening villain, and I predict he will use Luke’s loved ones to get to him. There’s no chance that they will ever be a physical match.

Shades finally recognizes Luke and gives Cottonmouth the lowdown on how he should have been dead all along. I’m surprised at how much Shades gets away with. I hope we gain more insight into his history. He’s very close with Cottonmouth, but also knows a lot about Diamondback (we get it, you’re snakes, guys). At one point, Shades even tells Cottonmouth to give Luke up, “it makes you look weak.” Wow! That takes guts, especially after he recently shot a crony right in the middle of his office.

So far, I really like Shades. Maybe it’s the mystery in his character, but he’s really intriguing. He doesn’t say very much, but he’s got a lot up his sleeve. He introduces Cottonmouth to a new alien weapon he thinks can take out Luke, but it comes at a high cost. I just hope this Diamond back is a scarier villain than the one we’ve got.

We also got a few glimpses at Claire returning to her mother’s diner in Harlem. So it looks like we’ll be seeing more of her this season. I’m so glad, because she’s a really grounding character to have in any Marvel show.

Meanwhile, Misty’s captain and vice-captain bring up the possibility that Scarfe is dirty. She denies it immediately. Oh no Misty, you’re in for a rude wake up call. Later, we see the vice-captain giving Scarfe advice on what to do, so he’s dirty too. The episode ends with Scarfe not going through with the gun exchange. I doubt he’s had a change of heart, but I’m sure he’s up to something interesting.

The last scene from Luke is at Pop’s funeral. He and Cottonmouth both speak and honestly it feels so fake. Neither speech was that impressive. Maybe it was the directing, but everything felt very inauthentic in this scene. Luke gets a bigger response (of course) and calls out Cotton mouth with “We have to stand up to a bully, especially if he calls himself a friend.”

I hope Luke Cage can create some gravitas surrounding this other villain, Diamondback. Right now, there are too many clichÃ©s and not a lot of weight to the show. It’s really missing the emotional drive that the other Marvel shows had.

I understood the purpose of the scenes with Luke getting a suit for Pop’s funeral, but it felt very frivolous for the situation.

Shades’ “There’s a bullet for everyone” was pretty slick, too.