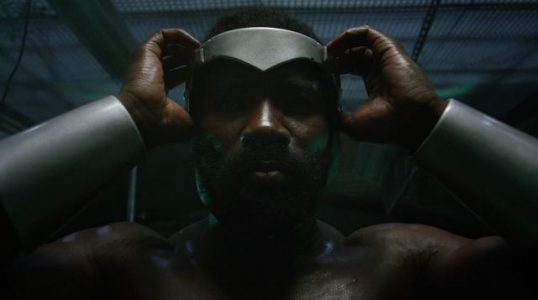 So far, Luke Cage has dished out some cheesy clichÃ©s, a few twists, and plenty of action. “Step in the Arena” gave us insight into Luke’s origin. If you’re like me and you didn’t really know of the character until Netflix’s Jessica Jones then you’ve been itching to know more about this incredible man.

The majority of the episode was a flashback to Luke’s time in prison. In a previous episode he said that he was “Framed and then tested on like a lab rat,” so I am disappointed that we didn’t see how he was framed, but the writers alluded to it enough to satisfy me. We learn a lot about who Luke Cage was, and how he became the man he is now.

While in prison, his name was Carl Lucas, he had unkempt hair, and he was powerless (but still a pretty huge guy). No one in the prison let him forget that he used to be a cop, particularly Reva Connors. We know that later she will be Luke’s wife, and then killed. Her death will be a driving force for Luke’s motivation to save innocent people. Their relationship within the prison was interesting. She worked as a psychologist, trying to help prisoners reconcile with their past, and Luke wasn’t having any of it. They slowly fall in love after she cracks him by revealing her own past, and it’s really a bittersweet plotline. I really loved the Fitz-Henley’s portrayal of her, she’s a very strong, yet emotional character and she gave us a nice introduction as to who the character was at her core.

We also met a fellow inmate, Squabbles, who was an optimistic man who manages to calm Luke even in the most difficult times. Just as the death of Pops felt inevitable, so did Squabbles. I don’t know about everyone else, but the fact that Squabbles died off camera with just a brief sentence sealing his fate felt very empty to me. How did I become so infatuated with their friendship so quickly?

In any case, Luke’s size and strength turn out to be more dangerous for his friends than they realized. The guards have a secret prisoner fighting ring, and they stream it online. Luke makes a deal with Rackham, in order to keep Squabbles safe and Luke in the ring. It doesn’t last, though.

One big problem I have with this show so far is that the show doesn’t date itself very well. The tone of many of the scenes were similar to noir, and I often think that the story is set in the 1990’s, or at the very least, not 2016. There is a lack of technology in scenes, and it really makes the time really vague. Then characters talk about BeyoncÃ© and Nicki Minaj and I think “Oh right! It’s in the present, go figure.”

Luke managed to warn and save Reva just before Shades and his buddy circle in on him. They beat Luke until he’s within an inch of his life, which I still have a hard time believing, but I guess it’s necessary for the story.

Reva and Bernstein rushed Luke to the infirmary where Reva begged the doctor to save his life. Aha! So the rumors about the experiments were true! Reva, you liar! Bernstein agrees to do the procedure, and says “You’re probably going to die, but you’re dying anyway.” He placed Luke in a chamber full of water, with metal clasps on his arms, legs, and head. During the procedure, Rackham enters and turns the voltage up to the max amount. Instead of killing him, the room explodes, killing (I think he’s dead) Rackham in a sweet bout of karma. Luke exited the chamber, and punched his way out of the prison. This was a direct parallel to his present problem, where he punched out of the rubble of his apartment building to save his landlord, Connie.

Luke saved, and stronger than ever, has a small callback to the comicbook costume, complete with metal headpiece and yellow shirt. He looked at his reflection and said, “You look like a damn fool.” Later, he and Reva meet, kiss, and briefly discuss what happened. She promised to “Explain it all.” Will she, though? We already learned that Reva was good at keeping secrets. Will that play a part in her death? Together, they chose his new name, Luke Cage, after a bible verse saying “No one can cage a man if he truly wants to be free.” Poetic.

In the present, Luke saved his landlord, Connie. I love her by the way, she’s so charming, and matter-of-fact. Also, the small scenes between her and Luke are really funny and cute. “I’m kind of strong,” understatement of the day, Luke!

I’m excited for the next episode, are you binge watching Luke Cage, or are you savoring the show slowly? Let me know what you think!

Some other lines that were strong:

“Slavery was always a good offer, to a master.” -Luke’s response to Rackham’s offer.
“He’s in prison, but he’s not a prisoner.” -Reva’s observation of Luke’s demeanor in prison.

Luke Cage finally gets the origin story you’ve been asking for.