Home
Comic-Con
MacGyver Reboot Preview: Executive Producers and Stars Sound Off on What to Expect 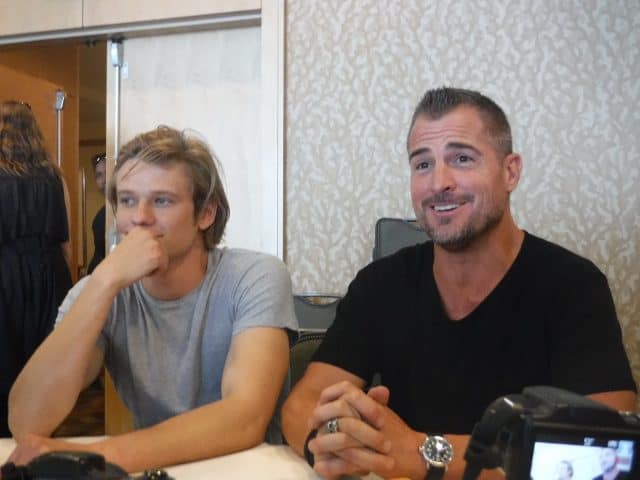 Looking for the hero with a Swiss Army knife and duct tape? Prepare to be pleased, as the reboot of the 1980s classic MacGyver premieres tonight on CBS. In July we talked to Executive Producers Peter M. Lenkov and James Wan, as well as stars Lucas Till and George Eads, about the new series. They gave us a sneak preview into the re-imagining of MacGyver, as well as how the reboot will differ from the original.

Executive Producer Peter M. Lenkov is no stranger to reboots, as he’s the mind who successfully rebooted Hawaii Five-0. Seven seasons later that reboot is going strong, so Lenkov was up to the challenge of re-introducing another old success. “When you look around the TV landscape, there’s not a lot of characters that are sort of ‘cerebral heroes’, that are thinkers before they act. That’s MacGyver.” Fellow Executive Producer James Wan is just as excited to introduce MacGyver in a more modern setting, but with the same flair. “In a digital world, MacGyver’s still analog. His brain is very practical in a lot of things” says Wan.

So that the character MacGyver remains in the spirit of the original without compromising some of the hallmarks of modern day crime-fighting, the titular hero will now be apart of a full-fledged team. “We’re also bringing back roles that were in the original and we’re actually making those roles a little bigger” Lenkov explains. For example, MacGyver’s original boss Pete Thorton will now be Patricia Thorton (played by Sandrine Holt). Jack Dalton (played by CSI alum George Eads) is especially necessary because in staying with the original show’s spirit, MacGyver will never be the first to use a gun. As Till and Eads see it, “Jack is just a metaphor of a Swiss Army knife for the guy”. Additionally, just because we live in the 21st century doesn’t mean that MacGyver is suddenly going to become reliant on technology. “There’s a character, Riley, she’s apart of our team. She’s kind of how we compartmentalize [the advancement in technology since the original] and still keep MacGyver doing what MacGyver needs to do,” says Till. It’s a truly diverse team, in which Lenkov couldn’t be more pleased. “What we’re really doing is creating a family, even though it’s MacGyver, making it more of an ensemble show.”

The team is reimagined, the world has changed so much, but MacGyver and what he represents will remain the same. Everything will be encompassed. “We wanna take that spirit and find new ways to show it to today’s audience…play into the more computer technology world we all live in” says Wan. Lenkov further explains that the attitude the reboot has towards technology is almost reverse engineered from the ideas of other procedurals. “We sort of want to go back to the ways of creative thinking…solving problems without using technology. That’s one of the special things about the character. If you’re a young person watching the show, I think you’re gonna be inspired to be creative, inventive, to use the skills that most people set aside because technology makes it so easy for us to solve things.”

Fans of the original series will get the callbacks they want as well. Each week the team will travel somewhere internationally, the opening will still have the same sort of “Indiana Jones-type gambit”, and MacGyver will pull out some of the original ‘MacGyverisms’. “The name itself is almost synonymous, it should belong in the dictionary.”Â For Wan, MacGyver “stands for an ideal. He is an action hero who doesn’t resort to violence until as a last resort. In the world we live in today which is so violent, we could possibly get a hero who uses his brain to solve issues.” It helps that whatever he has to do, MacGyver is still going to have a blast doing it.

Tune in to MacGyver, tonight at 8pm on CBS.