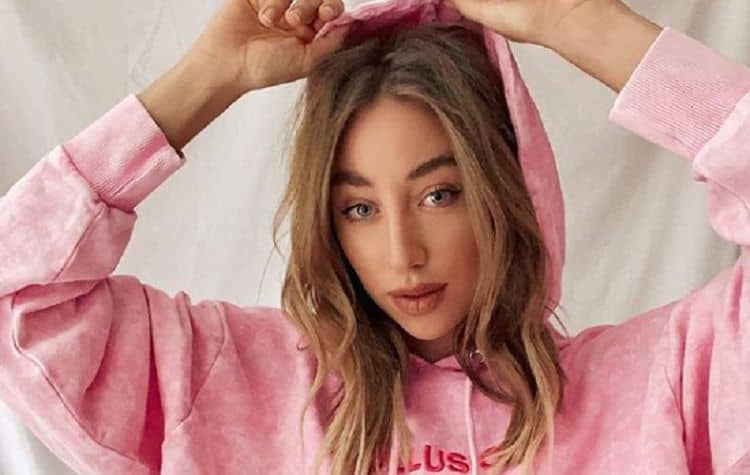 Have you ever scrolled through Macy Mariano’s Instagram? If not, that’s what’s missing in your life. Up and coming Instagram influencer Macy Mariano, known as @wanderwithmacy, has us hooked and we are here for it. Her daily posts on the vast platform are making us wish we had her outfits and tremendous long legs. She’s young, goofy, has fashion taste, a sneaker chick, and we are just dying to get to know her more. So, get prepared to see Macy in a whole new light, as there is much more than meets the eye.

Although raised in South Florida for most of her life, she was originally born in Charlotte, NC. At about nine years old she moved to Miami, FL with her family and has lived there ever since. Macy has spent time there in the mountains of both North Carolina and Virginia, where some of her family lives on acres of land. She’s a city girl, but country girl at heart.

Only a small handful would know, but Macy is a part of a big family. She’s the oldest of four other siblings, making them a total of five children. Macy is currently 28 years of age; however, all siblings are over 21+. All siblings get along very well and most do live in FL.

We have only seen Macy date one guy in the past and is pictured on her Instagram just rarely from almost a year ago. Now, Macy is single and knows what she wants! Get in line guys, because her dating life is about to blow up with young suitors that want to whisk her away. From sources, we know she is looking for a relationship, but from past situations, she does prioritize herself before anyone, unless it gets extremely serious. Just slide in her DMs and give it a shot.

Although you could probably see them from her gorgeous images from Instagram, Macy has six tattoos, all with sentimental meaning. A wave, triangle, script, a rose bud, and two phrases of two words. We love her “good girl” tattoo which is super pretty and minimal placed on her right outer shoulder. She plans to get at least four more on her right arm.

Macy loves beer and wine, but we think she likes beer much better. We have seen a couple images of her with beer and also on her stories. She recently did some content with Blue Moon, which she confirms is her favorite kind of beer. Macy only drinks hard liquor rarely and on special occasions. All it takes to win Macy’s heart is a cooler of ice-cold beer, the beach, and a football.

6. She Has a Small Circle

Even though in her large Miami community, many know her, but Macy does have a small circle of friends and only four best friends. One that many may know is Instagram model and law student, Jilissa Ann Zoltko; we have seen Jilissa throughout her stories almost weekly. The two have grown fairly close over the past three years. Macy also has a younger sister Kenzie Mariano, only by 11 months, and they are known to have a close relationship. For Macy, it seems like the closer the circle, the better.

Horoscopes are important these days and signs have become very popular to find and analyze compatibility. We did some snooping and Macy is a Scorpio! Her birthday is October 28, 1991. Even though we see images of Macy every day, she is an introvert and homebody, which are traits of the sign. In her past dating scene, very early on she has dated a Gemini Man, a Leo, and a few Capricorns. Her latest relationship, which broke off back in January 2020, was with a Leo man and said to have been her longest lasting relationship. Although, from sources it was said to have been a fantastic relationship, the two do not remain friends.

Thinking that it’s time we get Kendall Jenner and Macy together for a horse-riding session, because Macy used to excel at Equestrian. It’s said that it was one of the first sports she ever did and really came to love. We guess being a country girl at heart has its perks.

Her last name sounds like it could be of Italian descent. Well, it is! We have uncovered that most of Macy’s background is of Sicilian ancestry on her father’s side of the family. She is also Scottish and of course more American than anything. She does not speak much Italian, but she has learned some of the language from previous relationships.

Hailing at roughly six feet tall, who wouldn’t pick sneakers over heels? Glancing at her Instagram, Macy has quite the shoe game and we are absolutely here for it. This girl has got sneaker taste. We have seen her wearing mostly Air Force 1’s and her marveled Jordan 1 Obsidian’s so quite some time. She shops for her sneakers at Stockx and we have been seeing a new pair almost every month.