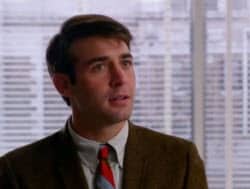 In the penultimate episode of Mad Men, we didn’t see any of the rumored deaths that were supposed to accompany this season, but we did open with one that almost came to pass. Poor Ken Cosgrove, almost manslaughtered at the hands of General Motors. That kid really has been through quite a lot.

Outside of turning one of the members of the agency into a pirate/swiss cheese, the episode focused on other plotlines which have slowly been unraveling this season. The most noteworthy? That mystery we’ve all been following closely: Who the **** is Bob Benson?

Last week, we saw Bob confess his undying love for Pete, but this week, it seems things might not be so clear, despite Bob’s rainbow colored tie. When Pete subs in for Ken on Chevy, he’s forced to work with Bob. He attempts to drive him out the company by having Duck find him a new job, but in his research, discovers that Bob isn’t who he claims to be at all.

So, who is he? I’m not sure that’s 100% clear yet, but it appears the answer is something of a scam artist. All of his credentials are forged, and he spent his last job being something equivalent to a manservant. How he landed his job at SDCP is unclear, but perhaps the best moment of the episode is when Pete finally wipes that smile from his face.

Even more interestingly however, Pete isn’t going to expose him. He recognizes Bob as a more dangerous version of himself. A schemer who will do anything to get ahead in his career, and Pete doesn’t want him as an enemy. In return for calling a truce with Bob, he agrees to let his secrets lie. It’s making a deal with the devil, but that’s perhaps a better alternative than taking the devil on in hand to hand combat. I can’t wait to see what Bob does next once he’s got Pete in his pocket. And not in a gay way, as I’m pretty sure that was faked too.

The next thread involves Sally trying to distance herself from both her parents by getting into boarding school where she’ll surely appear even less frequently on the show, unfortunately. I really do like her plotlines. In any case, she has to bend over backward to impress the girls at her potential new school, which involves getting them drunk and stoned at the hands of Glen and his skeevy friend. I loved how finally she realizes she really does want Glen to like her, and I loved how Glen finally stops being a little creep, and tries to defend her honor. I swear if Mad Men lasts another ten years (which it won’t), I want the two of them to be the stars.

Also, how great was it seeing Sally and mother dearest smoking a cigarette in the car side by side? Parenting of the ’60s everyone!

Lastly, we have Don, going into full-blown alcoholic mode, trying to recuperate with the mental anguish that follows his daughter discovering that he’s cheating on his new wife. That soon passes, and he’s back at war at work attempting to untangle Ted and Peggy’s very obvious affection for each other. It was a really complicated scenario as he attempted to extract Ted’s love for Peggy from the work at hand in a way that made him look like the bad guy to Peggy. Part of it may be that he’s annoyed Peggy is attracted to the “good guy” version of himself, Ted, but mostly I actually think he did the right thing in this instance. What else could he do, really, that would allow Ted and Peggy to keep making the ad and save face?

I mistakenly thought that tonight’s episode was the finale, but we do have the oddly numbered episode 13 still to come next week. See you then!