Previously on Mad Men: Pete and Ken were both made head of accounts, Roger’s daughter got engaged, Peggy gave Pete’s baby away and always picks the wrong boys, Betty’s dad had a stroke and a money hungry brother, Roger divorced Mona and got married to Jane, and Peggy felt excluded from the boys’ club.

We open on Ann Margret singing “Bye Bye Birdie” while Ken, Harry, Peggy, and Sal watch in a conference room. How is it Ann Margret manages to be shrill and nasal at the same time? They cut the film and discuss how Pepsi wants the same look for their new commercial for their diet drink, “Patio.” Peggy argues that a sexy blond isn’t the way to appeal to overweight women, to which Harry responds, “You’re not fat anymore.” Such sensitivity! Peggy argues that clients don’t always know what’s best for them, to which Ken replies, “When we land them, you can talk to them that way.”

The Draper’s kitchen. Sally and Bobby are cooking something on the stove while Betty looks impossibly beautiful, never mind the fact she’s 8ish months pregnant. She’s wearing a gorgeous embroidered white nightgown with a housecoat covered with red roses. She complains that Carla must have eaten all her melba toasts, to which Don retorts she needs to eat something, that baby is going to weigh like a pound. He complains about the cost of the decorator Betty has hired (for the baby’s room? not sure), and Betty says it would be so much easier to pick out chairs if they spend the day in Tarrytown. The kids complain, but Don is all about getting Betty what she wants, so they will go to Tarrytown and the kids will like it – especially since they can get ice cream after staring at antique furniture. He heads off to work, and then Betty says in a mom voice I’ve heard coming from myself, “What are you doing?” to Sally and Bobby offscreen. Heh.

Pete and Paul are meeting with the men who want to tear down the original Penn Station to build Madison Square Garden (spoiler – it happens!). Pete tries to butter them up for Paul, but Paul kills the mood by arguing they’re committing a travesty. They get angry and leave, and Pete says he’ll have to tell Don about this. Paul begs him not to, and tries to argue now the clients will listen to him because he’s been honest. “Do you ever listen to yourself?” Pete snipes. I think I have to agree with Pete on this one.

Joan walks with Betty towards Don’s office as she compliments her on how well she’s carrying the baby. Once again, she looks impossibly beautiful, this time in a pink empire waist sheath with matching coat. She’s got a great updo too. Joan sends Don’s latest secretary off for a glass of water, but first Betty wants an estimate of how long she’s going to be waiting around. Somebody seems a little cranky!

Roger, Bert, and Don visit Mr. Pryce’s office. Mr. Pryce complains they’ve lost the Campbell’s Soup account in Europe. Bert says if Pryce is going to call them down every time they lose an account, they’re going to wear out the carpets, and leaves. HA! Pryce tries to get Don and Roger to explain what happen, but Don says it’s his job to attend meetings, not set them, and Roger just wonders if Pryce ever got drunk enough to try on the suit of armor standing in the corner.

Don and Roger head back to Don’s office, where Betty is waiting. Roger compliments her by saying Princess Grace just swallowed a basketball. She’s cool and asks him how he’s been. “It’s not hard to adjust to happiness,” he quips. Don helps Betty on with her coat and they leave. The camera lingers on Joan and Roger and what was and wasn’t. She give him a lingering look while fidgeting with her wedding band, but says nothing. “Goodnight, Mrs. Harris,” Roger calls after her as she leaves. The camera cuts to Don and Betty, who growls she’s in a foul mood. 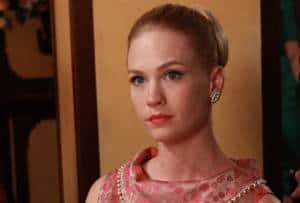 The Pryce’s and the Draper’s are out to dinner. The Brits are amazed there’s real French wine available, and have ordered up a ’49 Chateau Lafite Rothschild, which is agreed by all delicious. Mrs. Pryce obviously hates New York, complaining what they’ve lost in London, they’ve gained in insects. But just before things get ridiculously awkward, they coquille arrives. “Brilliant!” Mrs. Pryce says. Saved by the shell.

Don and Betty drive home. Don apologizes for the less than thrilling dinner company, to which Betty responds, “It was just the cherry on my sundae.” Before the silence drags on too long, Don says, “What? Tell me now and not three seconds after I’ve dozed off.” I swear, have the writers been eavesdropping in my house? Anyway, Gloria, her dad’s wife, has left him. Don thinks it’s because she realized Betty’s dad is a “sonofa”, but Betty is upset. She can’t travel in her condition, so she’s invited her brother and his family to drive down with their dad. Don wonders why she’s even asking him.

Roger’s family is there to visit him the next morning at Sterling Cooper. His daughter Margaret and Mona walk in, with Mona dressed as the world’s most fashionable widow. He offers drinks all around, mostly so he can have one himself, and they discuss wedding details. Brooks, the fiance, has been told to come late because things get ugly. Not surprisingly, Margaret cares not one bit for Jane, who’s “young enough to be my sister”, and says she will ruin her wedding day if she has to see her. Mona has proposed a compromise – Roger and “June” can host their own table, and Mona will sit with the new in-laws. And she doesn’t need Roger’s help with a date, thankyouverymuch. Brooks walks in the middle of the ugliness, calling Mona “Mom” and Roger “Sir.” Interesting. . . Margaret tones things down for Brooks’ sake, and says she likes the invitation with the silver bells. Roger notes the date, November 23, and says he’ll be sure to tell Jane.

Pryce walks into Don’s office. He thanks him for a swell evening, and said Betty lifted Rebecca’s spirits inestimably. What, she went from suicidal to immensely depressed? Anyway, the real reason Pryce is there is Don needs to save the Madison Square Garden deal, since Pete and Paul did such a bang up job. He and Roger are to have lunch with a VP. Don’s not thrilled, but says send him the file.

The Hofstadt’s arrive at Casa Draper. Betty says she’s made everyone lunch, but her dad says they stopped at Pat’s Steaks instead. He brought her a half, and even picked up a chicken parmesan for Gloria. Betty’s brother sneers they’ll send it to her in Boca Raton, while Betty looks upset. Brother William goes on to say dad knows exactly what’s going on, he’s just playing for sympathy. Sister-in-law Judy reminds dad to take his medicine, while Betty looks on.

Peggy watches Joan work her magic on a group of businessmen, and looks thoughtful. 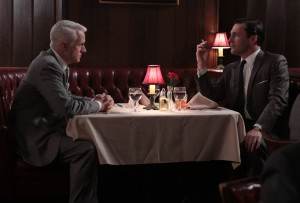 Don’s sitting at a restaurant as Roger arrives. He’s sorry he’s late, and Don kind of bristles because what does Roger have to do all week? Roger explains the unhappy family visit, and says he made his bed, now he has to lie in it. “Your words,” Don replies. Roger will get no sympathy from him, but goes on to claim that it’s all Mona’s fault, she’s putting poison in Margaret’s ear. Sure Roger, nothing to do with your abandonment of your family for your kniving child bride. Just as the pity party hits it’s stride, the Madison Square Garden guy arrives. Roger apologizes for Pete and Paul, and asks what they can do to help. MSG Guy points out isn’t it their job to tell him? Roger wisely turns it over to Don, who works his magic. He really is very good at his job. He says they have to shift the conversation from the desecration of a landmark to “Look! Something new!” MSG Guy is intrigued enough to stay for the wedge salads with blue cheese and bacon. Mmm, yummy.

Draper house. The kids are zoned out on TV, but Grandpa wants to watch his ballgame. Judy gets him set up, then joins William and Betty in the living room. There’s a discussion of dad’s health, and William wants to put dad in a home. William says he and Judy could sell their house, and that should cover dad’s expenses. Betty asks Judy what she thinks, and she says she knows she doesn’t get a vote. “Neither does Don,” William says. Betty quickly deduces this is about William getting the house, not about what’s best for dad.

Don arrives home late at night. He checks in on Gene, who’s in some kind of room under the stairs. He heads upstairs to the bedroom, where Betty is reading a magazine and drinking wine. He’s amazed everyone’s down for bed just after eight, and asks how her dad is. Betty says William’s never ending bull (her word!) is the problem, not her dad. She doesn’t want her dad in an old folks home. Don says he knows it’s not ideal, but it’s an option. Betty says he just wants the house. Don asks her what she wants to do, and Betty wonders how William could talk to her in the condition she’s in?

William and Judy are in bunk beds. He complains he can’t believe Betty doesn’t think about how she and her dad used to fight. Judy wonders why they can’t just move in with him, and William says it’s bad enough to work for him. 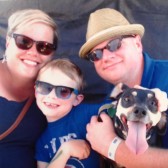 I'm a stay at home mom of a curious, enthusiastic, three year old. This means I'm handy with first aid, and an expert with cleaning supplies. When I'm not busy with that, I write a food blog at http://foodiehousewife.wordpress.com/