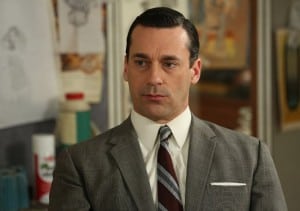 Change has come toÂ Mad Men, change that Don Draper implemented but in the cold light of day it might not be all that he thought it would be or wants. This begins one of the many power struggles of the episode as everyone tries to adapt to the merger without getting left behind. Don might not control the chaos at work but one place where he tries to assert his power further is with his relationship with Sylvia (who we haven’t seen in the past two episodes). This fantasy that he has tried to create must also come to an end.

While most people are worrying about their job security (or the fact that they don’t get a chair at a meeting) Don is pretty comfortable with going about his usual unannounced comings and goings. He is forty minutes late to a meeting and this already shows where there is a big difference between Ted and Don. With Sylvia he is exerting his power in the most blatant sense; he is commanding her every move. At first Sylvia is reticent as she doesn’t comply with his crawl on the floor demands, but does get undressed and stay at the hotel. This extreme side of Don is one that Sylvia hasn’t seen before, but we have in his previous affairs including when Don tied up Bobbie Barrett after she mentioned she had discussed Don with some of his previous conquests. This element of control is also something that we have witnessed with Megan and with the prostitute that he regularly saw at the start of season 4. Don’s attitude towards sex has been heavily influenced by his upbringing (Weiner reinforced this notion with the flashbacks from this season) and this side comes out when Don is having power play issues.

This sudden change with how Don talks to Sylvia has a lot to do with the argument he overhears between Sylvia and Arnold and by using this dominating tone with Sylvia, Don is turning their relationship into a fantasy role play. He tells her that she can mention her son but not her husband when she starts to tell him why she is mad at Arnold and this is meant as a way to distance Don from the reality of the situation. The spell is broken by the end of the episode and even though Sylvia took part in this domineering play, she also held back. It’s unreasonable to expect another person to bend to your every command and Sylvia lasted a lot longer than expected, but maybe she wasn’t quite ready to let go of this affair. This was until she had a dream about Don dying and having Megan cry on her shoulder. As soon as Sylvia mentions Megan, Don knows it is all over and he loses his power. He reverts to begging and the way he clutches onto Sylvia’s hand resembles the way he did it to Peggy when she quit SCDP last season.

Don doesn’t initially understand the meaning of Sylvia’s dream and why she wants to finish this for good. He cruelly tells her that “It’s easy to give up something when you’re satisfied.” Sylvia replaces satisfied with ashamed, which makes a lot more sense considering the chat we saw between Sylvia and Megan where they discussed their Catholic upbringings. Is this really the end for Don and Sylvia? Don has returned home and once again Megan is talking and Don isn’t listening. This is something Megan complained about to her mother and is something we saw in this season’s premiere – a place that Megan is talking about in this discussion. The final scene of the episode reinforces the disconnect between Megan and Don; Megan is watching the news crying as they show Bobby Kennedy’s assassination while Don looks the other way and doesn’t comfort his wife. They might be in the same room but they couldn’t be further away from each other.

One piece of advice Don should take is form Peggy who tells him that he should “Move forward.” Peggy is unhappy with how Don has tried to exert his power in the office over Ted. Don tries to show Ted who is really in charge by getting Ted drunk and as Peggy points out no one can drink like Don. Drunken Ted is amusing as he takes a straw poll regarding who everyone will be voting for, but it also heavily undermines him. Ted manages to gain back some control thanks to his piloting skills and this might be the most scared we have seen Don (except maybe in his Dick Whitman Korea flashback) as they fly through a storm in essentially what is a flying tin can.

Pete is having issues with his mother, who is suffering from dementia and believes that her husband is still alive (though she is perceptive enough to know that Pete’s apartment was originally intended to be a hook up pad). Pete is concerned about his job and so has no time to be concerned about his mother and engages in a battle of wills with his brother about who should take care of her. It’s rather tragic that neither of them particularly cares about her, with Pete spitting to Clara that “My mother can go to hell.” The Campbell family are not close and Pete sees his mother as a nuisance who is getting in the way of his work. 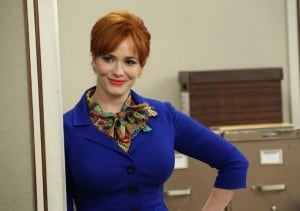 When Joan’s mother states that “Every good deed is not part of a plan” it’s easy to raise a sceptical eyebrow but what about the mystery that is Bob Benson? The guy who will happily get you toilet paper, pay for your prostitute, carries two cups of coffee around just in case and will accompany you to hospital.

Like everyone in the office Joan has an image to uphold and so she doesn’t want people to see her in a vulnerable state. Bob helps out and then stays with Joan at the hospital and while this could all be to save his job (a job that he would have lost if Joan wasn’t creative in why Bob needs to stay – though Pete also thinks he is vital, possibly because of everything I listed above) is he just a good guy? I could be getting distracted by his looks (making me like Joan’s mother) but this show also makes me incredibly wary so Bob probably does have a job saving agenda. It feels kind of sad when Bob tells Joan that he has no place to go, does Bob live and breathe for this agency?

– Â Roger gets to fire Burt Peterson all over again and appears to take way more pleasure in doing it this time.

– Drunk Ted “Don’t you have any hope?” I wonder how long Ted will be talking like this as he hangs out with Don more.

– Where is Dawn? Peggy mentions that she spoke to her but we don’t see her all episode?

– Will the Bobby Kennedy assassination reverberate through the next episode? It’s easy to see why Pete might have thought his mother mentioning that Kennedy had been shot was another moment of confusion, especially when she followed it up with a comment about school.

– Bye Margie, we hardly knew you but you seemed like a fun part of the team even if clients thought you were Peggy.

– Don’s reasoning for opening up your booze box first when you move office is “for clients.” Yeah right.

– Bob Benson’s choice of present for Kevin was bizarre, but at least Kevin can play with the ribbon. Is this a new potential relationship or will Joan stay clear because he is “too young?”

– The song that plays over the credits with the Kennedy news report over the top is “Reach Out of the Darkness” by Friend & Lover. This technique reminds me of Simon & Garfunkel’s “Silent Night/7 O’clock News.”

– I have a feeling we’re going to see a lot more Peggy eye rolls towards Don in the coming weeks.

– Stan is impressed by Peggy’s margarine knowledge and it looks like there are no hard feelings over Heinz Ketchup.

– One pairing who aren’t having any power struggles yet are Roger and Jim Cutler; they might even take a trip together.