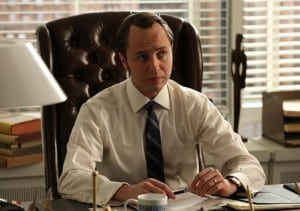 Don Draper is always striving for the thing he doesn’t have and this episode ofÂ Mad MenÂ explored the idea of reconciling the life these characters want to lead with the life they do lead. Don gets another chance to experience a past relationship and in doing so is given a lesson in how hard it is to really be with him.

Last season Don managed to break his old habits as he managed to stay faithful to Megan for the whole year. This period is over and he has been having an affair with a woman in their building and now that has ended he sleeps with Betty in this episode. Betty has got her mojo back as she has lost all the weight and she’s become an object of desire again. Earlier in the episode she is propositioned at an event and when she tells Henry about it, instead of getting possessive he is turned on by it. Betty is leered at by a gas station attendant and previously Don might have got aggressive about this, but he doesn’t and like Henry he finds this moment to be alluring. At the diner with Betty and Bobby, Don gets to have the perfect family moment, but when he had all of this it was rarely this pleasant. Don is the guy (like most people) who wants the thing he doesn’t have and when he does get it, it doesn’t fill that empty hole in the way he hopes.

In bed Don tries to claim that an embrace is the same to him as sex is and that sex doesn’t mean that much to him. Betty can see through this statement and she knows him better than anyone, having lived with him both pre and post the Dick Whitman revelation. Betty also shows a surprising amount of compassion towards Megan (though she would never do this to Megan’s face) as she perfectly sums up how Don is with relationships “That poor girl. She doesn’t know that loving you is the worst way to get to you.”

Megan is having her own crisis of confidence related to both her work and her personal life. Megan has been given another role on the soap she is on (she’s playing twins!) and she’s worried that her performance isn’t want they want. The divide between Don and Megan which has been a repeated motif all season is no more evident than in the dinner scene early in the episode; Megan tries to share her problems at work and wants to know about Don’s day and he just wants to sit in front of the TV and drink.

When Don returns from camp he finds Megan out on the balcony in a t-shirt and her underwear (I’m guessing because it is hot) and she finally confronts him about his emotional distance. Don agrees that he hasn’t “been here” and he doesn’t offer up a solution beyond a kiss; this marriage still feels pretty doomed and I hope that Megan manages to find a friend to stop the loneliness that she has been experiencing. A friend who isn’t Arlene as she saw Megan’s invitation as a proposition and Megan did a good job of turning her down. Despite Arlene’s assurance I worry that they might Joey Tribbiani her at work and drop her down the equivalent of an elevator shaft. 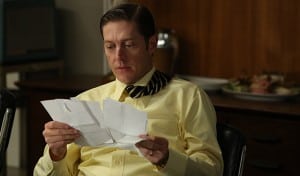 The episode opens with Peggy caught between her two bosses and which direction the margarine campaign should go in. Peggy doesn’t really pick a side in an attempt to be diplomatic and this earns her another argument with Don. Peggy tells Don that he shares the same pig headed and demanding qualities as Ted but that Ted is interested inÂ theÂ idea, whereas Don is only interested in Don’s idea. Peggy adds that Ted never makes her feel like Don does and Don’s only comeback is that Ted “doesn’t know you.”

What Don doesn’t know is that there is romantic tension between Peggy and Ted. After weeks of not mentioning the kiss, Ted brings it up and Peggy says that she shares the same feelings. Ted says that nothing can happen between them as they both have respective others, but by the end of the episode Abe has broken it off with Peggy. When Peggy informs Ted of this, he acts like the earlier conversation didn’t happen cutting Peggy adrift. Now she is left with an apartment that she doesn’t want, in a neighborhood that she is terrified of and caught between her two bosses once again.

In an attempt to be a fun grandfather Roger loses all of his privileges after he takes his grandson to seeÂ Planet of the Apes. Margaret refers to her father as a child and he gets another reminder later in the episode from Joan that he isn’t reliable as she believes it’s better for Kevin to think that Greg is his father as he is a hero in the army overseas than Roger, who is present in the same city. We haven’t seen Roger take that much of an interest in Kevin lately so it’s understandable why Joan is so reticent, plus it looks like she has a new relationship to think about! Yes I am very happy to see that things have blossomed between Joan and Bob Benson, though the slight look of concern on his face after Roger left is slightly worrying as it’s hard to figure out what Bob’s motivation is. Is he this good guy or does he have a bigger plan? One thing is clear about Bob Benson; he can rock a pair of short shorts.

Joan tells Bob about Pete’s family issues and this leads to a scene that might suggest that Bob is just a good guy (or not, he’s so confusing). Pete is finding that his situation with his mother is a distraction from work at a time when he needs to be focusing on whether he has a role in the new agency (still without a name). Pete goes to Joan with his family related issues and while she doesn’t have much of a solution (“I can’t solve these problems, I have these problems”), just listening helps. Joan explains to Bob that Pete is the only one that hasn’t ever broken a promise to Joan at SCDP and so she is sympathetic to his needs (he did have a big part in the Jaguar business but I guess in Joan’s eyes he was always upfront about it). Bob goes to Pete with a potential solution, Pete is annoyed that Joan has betrayed his confidence but Bob manages to smooth things over. Why is Bob so interested in Pete’s well being?

– “Then we went in the woods and made Sally.” Please don’t ever tell Sally that camping story, no one wants to know where they were conceived.

– There are constant sirens throughout the episode and not just in Peggy’s neighborhood and this is a sign of the general unrest of the time. Megan mentions shootings in the park when Arlene comes over, something Arlene is unconcerned with (possible foreshadowing for a future episode?).

– Bobby is “Bobby 5” at camp, there is no “Bobby 1”, not because of Bobby Kennedy as Betty guesses but because “Bobby 1” has gone home. Is Matt Weiner having a meta moment with all the different actors that have played Bobby onÂ Mad Men?

– Harry once again gets to be the voice of doom (and the voice of a jerk) as he asks Pete “Are you suddenly dumber than Peggy?” and then suggests that Pete contact a headhunter. This leads to seeing Duck again which is always fun.

– “Is he Spanish from Spain because otherwise mother will refuse?” Pete on Bob’s recommended nurse.

– It’s a really nice moment when Betty and Don are talking about who Sally and Bobby remind them of, but Gene doesn’t even get a mention. Poor Gene, you are the new Bobby.

– Betty doesn’t feel guilty about sleeping with Don as it is something that happened long ago, I’m not sure that’s how it works.

– “Out of context” is a great way to explain the whole awkward Joan, Bob, Roger scene.