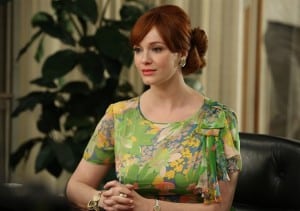 This season ofÂ Mad MenÂ has focused on both the personal and national discontent that permeates through 1968 and a “Tale of Two Cities” continues with this theme as everything feels fractured in the office and on the news. Using the backdrop of the Democratic National Convention in Chicago that ended with a peaceful protest turning into a violent riot;Â Mad MenÂ underlines just how disjointed everything is.

The episode opens with the discussion about the name of the agency and neither group has a solution that the other is happy with, there’s just too many letters and egos to fix it. By the end of the episode a compromise is met and they will be Sterling, Cooper & Partners (SC&P) but that doesn’t mean that goodwill has been restored as there are many agendas still at play. Pete has been disgruntled for a few weeks now and it looks like his issues with his mother have been attended to (thanks to Bob Benson) and he can once again focus on work. Unfortunately this results in a severing of one of his best professional relationships as he falls out with Joan over how she handled approaching a potential new huge client.

Pete ends the episode doing something unexpected and while it looked like he might take Don’s advice (especially after his meeting with Duck last week) and leave the business he heads to Stan and takes his joint off him and starts to smoke it. Has Pete decided that instead of leaving he should embrace the change? Pete did not partake in the injection fun and as far as I can remember this is the first time that we have seen Pete dabble in the counterculture of the time. Pete has long felt that his voice isn’t heard when it comes to the important matters, but it is surprising to see him resign himself in this way. He does still manage to have the Pete Campbell and look of contempt as he smokes.

The argument that Pete has with Joan is all about structure and rules; both of these things are lacking everywhere at the moment. Pete uses the one thing against Joan that he knows will hurt her the most and infers that she is sleeping with the client and even Peggy does this (though Peggy’s feels less intentional). No matter what Joan does when it comes to her job people will always be able to use this in an argument to put Joan down and Joan knows this. Despite this Joan still wants to have an influence at the company beyond how she looks and her secretarial skills and it’s heartbreaking to see this character be so full of confidence and lacking in self belief all at once. At the breakfast meeting she is out of her depth and after belittling Peggy’s attempts to talk to the potential client she then needs Peggy’s help to look professional in the meeting. 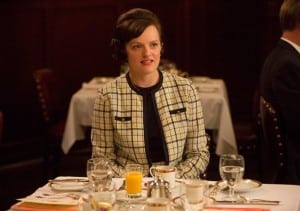 Peggy and Joan have never been the best of friends and all of their resentments towards each other comes out after this meeting is perceived as a disaster. The problem is that Joan has always seen Peggy as a threat (and really all women in this way) and she has asserted her dominance since Peggy’s first day at Sterling Cooper. This is all about authority and Peggy came in and upset the balance of that office by progressing in a way that no female had done before. Peggy did it all by working hard and challenging the norm and so when Peggy mentions that she didn’t sleep with Don, it’s the ultimate slap in the face for Joan. One thing that Joan should realize and probably does after Peggy helps her out later is that Peggy has never been against Joan, it’s not how she operates. I’m not suggesting that there will be after work cocktails in Joan and Peggy’s future but hopefully Joan will see that Peggy is an ally in the office and that she isn’t like everyone else. Peggy’s only mistake was to trust that Ted wouldn’t hand it off to Pete.

This might have all gone differently if Roger and Don were in the office but instead they have headed to LA to see potential clients that Harry has set them up with. It’s not just the time difference that sets these two cities apart as everything seems so much more laid back on the West Coast. The fear and instability that has hit New York and is spreading across the country (like at the DNC in Chicago) has yet to hit LA, but we know that it will especially after all the Manson Family/Sharon Tate discussions thanks to Megan’s t-shirt from last week. That won’t happen until 1969 and so parties like the one they attended in the Hills are common. That’s not to say that these kinds of parties weren’t occurring in New York, the drugs are the same but one feels less predatory at the moment.

Harry has acclimatized himself to the LA lifestyle whereas Don and Roger are out of their comfort zone; they don’t like the convertibles or the weather. The woman are to their liking, though Roger loses out to their old employee Danny and ends up getting punched in the balls after one too many short jokes. It’s worse for Don who nearly drowns in the pool; Megan earlier says that swimming is something that makes Don feel better but she probably didn’t mean in this way. Don has smoked some pot that leads to this incident and he hallucinated that Megan was at the party (after earlier seeing a woman who looked a lot like Megan getting out of the pool) and that she was pregnant. It looks like Don is trying to stick to his promise to make it work with Megan (though he does kiss another woman) and even if their opinions about the protests are opposing, it actually seems like Don is listening to his wife for the first time this season.

Don’s hallucination includes a mention of a “second chance” and a conversation with the Marine that he spoke to in the bar in the premiere – he is dead (at least he is in Don’s mind) and alerts Don to the fact that he might be too. This whole sequence is disorientating as we separate what is real and what isn’t. Did Don end up in the pool because he was looking for the woman who looked like Megan? When Don returns to the office one of the first things he does is ask to get Megan on the phone and while he could be going through the motions this incident might be another huge wake up call for him.

While Don and Roger are gone Jim Cutler wants to fire all of the SCDP staff after a blow-up with Ginsberg who is angry about what is going on in Chicago. Ted manages to talk him out of this but Cutler still attempts to manipulate the staff and goes through Bob Benson to do so. Bob jumps at the chance to have more responsibility and thanks to many discussions about Bob’s motivations it’s easy to get distracted by this in his scenes. Bob does manage to calm Ginsberg down as he is having a major panic about their role in the national turmoil and shows that he has worth and it’s not Bob’s fault that this client wants a review (they’ve been unhappy for months).

– Megan calls Don cynical after he says the debate on the war and the coverage of the protests will be on after primetime. It looks like the demonstrations are front and center on the news the following night though as it becomes a story that is too big to sweep under the carpet. Journalists were caught up in the violence both in and outside the convention hall. Here is a video of an incident with journalist Dan Rather.

– Megan can’t vote but as she points out she does live in this country and she’s upset by what is going on. Earlier in the episode Don mentions about going back to Disneyland, to a simpler time but Megan knows the reality of it all more than Don as they can’t go back to “the happiest place on Earth.”

– I was kind of hoping they would run into Paul Kinsey in LA, I wonder if he’s still trying to crack into the script writing business?

– Bob thinks that Ginsberg is freaking out because of “smoking too many funny cigarettes” but Ginsberg once again mentions that he doesn’t do any of that. It’s probably a good thing that it stays this way.

– Stan doesn’t have much to do in this episode but he sure knows how to exit a room when it gets too much.

– Ginsberg asks Bob if he is gay, Bob laughs this off but is Ginsberg right? This is one of the many Bob Benson theories (and probably the least ‘out there’ of them) that has been mentioned.

– Political opinions and differences are coming to the forefront in a way we haven’t seen before.