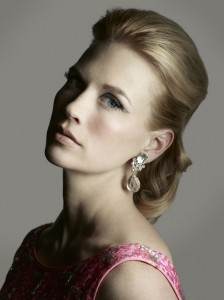 For those who watched Mad Men‘s season 5 premiere “A Little Kiss” this past Sunday night, something seemed oddly missing. Just where in the name of Sterling Cooper Draper Pryce was Better Francis?

Officially speaking, January Jones wasn’t available to appear in the two-hour premiere due to being eight months pregnant at the time of shooting, but the former Mrs. Donald Draper will return in all her icy blonde glory with this coming Sunday’s episode “Tea Leaves,” directed by Jon Hamm himself. When last we left Betty Francis, she and new husband Henry Francis prepared to move to a new home in Rye, New York, as she learned of Don’s engagement to Megan (Jessica ParÃ©), and expressed her unhappiness with her own marriage. So what’s next for Betty?

While Mad Men creator Matthew Weiner and the cast keep notoriously secret about upcoming plot developments, Weiner himself once indicated that the series would end on Donald Draper in the present day, by that point an 84 year-old man about Madison Avenue. We recently had a chance to speak to January Jones about that quote, and where Betty herself might end up as the series comes to a close in season 7. Says Jones of Betty’s endpoint:

“Hopefully not [modern day], I do not want to be “Aged Betty.” Poor Betty. I don’t know, it’s not really up to me, but selfishly, I don’t hope to see her find any sort of peace. I think that its more fun to play a character that’s got all these complications, and many layers of emotions and struggle and things, I think that it’s more interesting and more fun, but I think that she’s ever-evolving.”

“I think when Matt [Weiner] said that Don Draper would end in [modern day], I think he was talking about an evolution of a person from that time, I don’t think he would ever take us to 2012. I think we’ve only got a few more seasons, unless we do a major jump in time, that’s not going to happen. [As for Betty], I don’t know if she’d even be alive, she’s pretty hard on herself and her body.”

There you have it! Where would you like to see Betty Francis end up, and will she continue to stay married to Henry Francis (Christopher Stanley)? Tell us what you want to see from the current season of Mad Men, and be sure to watch Betty’s return this Sunday with all new season 5 episode “Tea Leaves!”