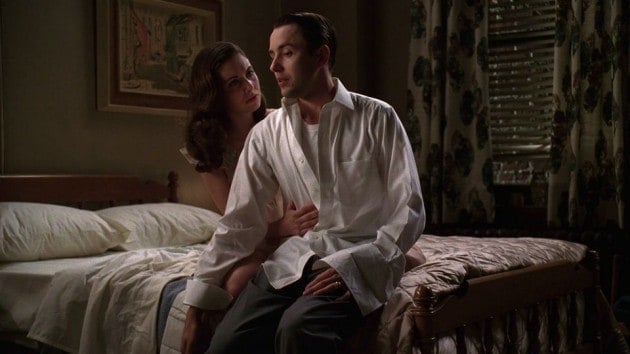 Don Draper and Roger Sterling, sitting in Don’s office, with cigarettes and booze. Don blows out smoke. “Kids today, they have no one to look up to, because they’re looking up to us.” You almost expect it to fade to black on Don’s face, so satisfied after he’s spun another line. A swift condemnation of the old and older and oldest; a chastisement of the fathers and bosses that have done very little to lead those after. He and Roger clink glasses under mutual agreement, but neither holds themselves responsible. They, of course, are doing things the right way; they, of course, are keeping their houses in order on Mad Men.

But they aren’t, are they? They are as much absent fathers as Glen’s and as bad of husbands as Helen’s. It’s not a matter of them not upholding the standard for men everywhere; rather, theyÂ are, and that is the problem. Don and Roger are the same bottom-feeders as anyone else; pretending otherwise is fruitless. Don, on some level, already gets this; it’s why he drove past his own home and away from his own child’s birthday party because he knew that he could not go into that house and be a bad father. The booze had stripped away his armor and put the truth right in front of him.

It was only a flesh wound, though. Only a temporary gash across his psyche. By the time we return to him in this episode, he hasn’t changed. He’s the same Don Draper. He’s the same man who pretends to be one man and then is another. Don is not the doting, faithful husband nor the top-shelf father that he believes himself to be. Betty tells Helen’s husband that she doesn’t allow strange men into her home, but that’s a lie. Don is more of a stranger to her than the husband who is willing to embarrass himself to get his family back.

What are we to make of Pete Campbell? The relentless ambition comes from the most typical of all places: a father’s disdain. You would almost call it clichÃ©d if it wasn’t so damn sad. Don is presented to us as the typical male archetype, and he is in some respects, but if Don is the ideal, Pete is the reality. Slight, out of shape, weasely; the definition of middle management. Pete comes from money, and privilege, and resents all of it. It’s funny; as much as Don and Bert and Roger hate Pete for who he is, he’s actually much more driven than Bert and Roger. The only person who matches his ambitions is Don, but that’s dangerous, because Pete is ahead of him by virtue of his wealth. Roger warns Don about this; he warns Don not to try and compete with Pete Campbell professionally. The great myth of America is that people are valued more for their productivity than their class status,Â but it’s more true now in 2015 than it was in 1960. Don doesn’t have a safety net, just his work, and if it really came down to the nitty gritty, Pete does.

There is a brain residing in that Campbell head of his; a progressive beating heart shows on his face whether he likes it or not. When his father goes on about the type of people that live near him, Pete is disgusted; this is something that repeats with Pete over and over again. He sticks up for black Americans several times throughout the series, and it makes no sense. It’s so hard to imagine Pete Campbell giving a damn about anyone but himself. But he does. He really does. He is fighting against societal condition, trying to find a way around it, trying to be better. Don is too, by the way, but Don is allowed to get away with things that Pete never could. Pete is not the stunner that Don is; Pete’s hair is already thinning, and his shoulders are narrow, and his smile insincere. If Pete gets too close, you can smell his desperation in every word, and have to keep one eye on his shaking, greedy fingers. But Don can sidle in, so quiet and soft, and the tension is a sound you can hear and feel in your ears. His voice becomes a rasp, barely above a whisper, and when he reaches out his hands, they seem to pull you in like a tractor beam. But Don is ultimately just as insincere. He wants candy, not a meal; he wants to run through Willy Wonka’s factory, not stock his pantry. Don wants to eat himself till he’s sick, and then find someone else to hold him tight until he’s ready to eat again.

Pete has no such luxury. He can’t boast about bedding Peggy because where those like Don and Roger can do so as a badge of honor, sleeping with Pete is something you do in a moment of weakness. Where Don can pull tricks to win clients, Pete cannot.

Could Pete have been a good person? I believe so. There were moments in which he rose to the occasion, especially in later seasons, and became self-aware. But in these early seasons, his ambition to be like Don and Roger was his undoing. In his desire to be a man, he copied those who are on on the way out; that old guard that get handsy with the secretaries and drinks through noon is a vestige of a broken era. Ken, Paul, and Pete; all three were less discriminatory than their older bosses, and those that would come after them would be less still. It takes someone with bravery to change the world; to cross arms at the podium and refuse to speak for those who do not speak for those who cannot. Pete is a part of the first men with a conscience, provided by a college education, but he’s still a dinosaur, if one wearing a suit.

Betty and Glen, kin across generations. Both are searching for something more than their lives can provide. Betty is the ‘refrigerator mother’ at her own home; Daddy Don is the one who gets all the tender moments and love. But with Glen, she is much more affectionate, because he is much more affectionate. Glen is being raised by a single mother, taught to iron for five cents an article, and of course, Betty disapproves. But being raised by a single mother gives Glen a feminine perspective instead of a masculine one, and his response to that is meekness and a desire for someone to love him. It’s a pointed critique of the way children were raised back then, and it gets lost amidst the weirdness of his behavior.

These characters find something in each other, even this early; Betty wants something more for the kid because she wants something more for herself. The weirdness of his behavior mirrors in many ways is the psychological trauma that causes her hands to shake. Glen is ignored and neglected by virtue of a society that hates single mothers and side-eyes women in general, and Betty is no different. There is no escape for Betty, and she knows this, and her hands shake, and she runs off the road and can barely cut a birthday cake.Â Both need something, and neither can provide it, but that doesn’t mean they can’t commiserate in some small way.

When Helen Bishop returns from the Jack Kennedy fundraiser, she hands Betty some literature about his campaign and what he stands for. The progressive causes of Jack Kennedy and liberals to come are a way forward for women and single mothers, and Helen knows this, at least subconsciously. She gives Betty that information because she recognizes the same pain in her as she does in herself; Helen was just as miserable as Betty is now, and Betty doesn’t even know the whole truth.

Bert tells Don and Roger than Pete can’t be fired, because he is a part of a larger machine. He is of Dykeman stock, a respected old family, and to have him fired is to lose a lot of business. Bert describes it as a watch, with many levers and gears and cogs that make everything tick, and Don half-jokingly says it sounds like a bomb. He isn’t wrong, but he misses the point; all things are this volatile. It’s not a simple matter of A + B = C. You can tell Betty that you’ve been cheating on her, and she might not leave. You can drop your voice to that whisper and get as close as possible, but Rachel might not go. There a million factors that go into everything, and Don can’t see that, because that would require an acknowledgement of others. That selfishness can serve you well if your goal is money, but if it’s anything else, I wouldn’t go into the kitchen to see how the sausage is made.