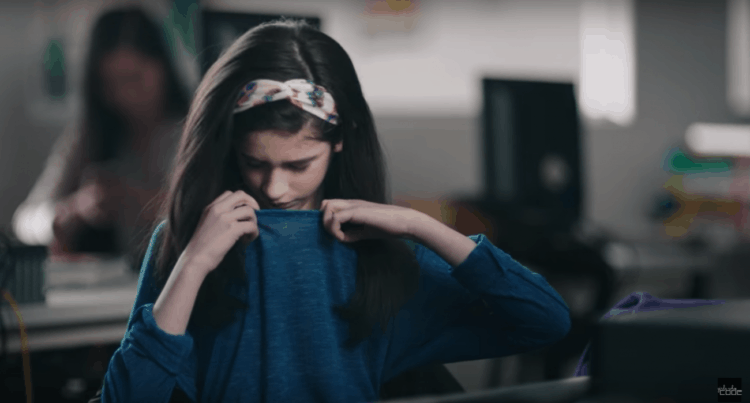 A few weeks ago, you must have caught Freeform’s new show, “Everything’s going to be Okay” that follows three siblings as they try to care for each other after their father passes away. One of the siblings in the show is Genevieve, a character played by Maeve Press. The young girl is a comedian, writer, and actress. Her acting career began nearly a decade ago, but there is not much known about her, so here is your chance to learn everything about her journey to stardom.

1. What sparked her interest in standup comedy

Maeve was the kind of girl whose parents pushed her to go outside and make friends instead of sitting in the house all day. When she was 11, her mother thought it best to sign her up for a one week camp, which turned out to be the best decision her mother ever made. Maeve found her calling in the camp since it was all about comedy. By the time it ended, Maeve was ready to go back the following week since, for the first time, she had found something she was interested in doing with kids of her age.

2. She uses her challenges to inspire her creativity

Whoever said disability is not an inability wiped away the belief that those living with disabilities always need help to be successful. Maeve revealed in her interview with VoyageLA that she grew up with learning disabilities and is socially awkward in school. However, it is through humor that she finds herself able to cope with the challenges she faces.

3. Why she started doing open mic

Sometimes you think you are prepared for something until the chance comes to do it, and you fall short of your own expectations. It happened to Maeve; while at the Kids ‘N Comedy camp in New York, the actress was excited that they could do comedy based on their creativity. The first week was awesome hence the motivation to sign up for another week. Unfortunately, she did not perform as well as she had in the first week. Maeve, however, was determined to prove to herself that she can be a great standup comedian, so she immediately signed up for open mic instead and has never looked back.

4. She wanted to be a doctor

The great thing about life is that every dawn is a new slate, and it is up to us to write our desired destinies on it. For Maeve, at 4, she knew that she would grow up to be a doctor because she loves saving people’s lives. However, by the time Maeve was 14, she realized that doctors and comedians share the same philosophy; while doctors save lives using medicine, comedians use laughter. Therefore the teenager said a career in comedy was still possible.

As much as Maeve loves making people laugh, not every show has been kind to her. She told Gold that when she went to do comedy for one audience, she was surprised to find that half of them were seven-year-olds. While that would have been okay, unfortunately, to her rude shock, the other half were toddlers. Maeve recalls that she was confused, and even the toddlers did not enjoy the show. As per her memory, there was one child who said he wanted to die.

No matter how good you are, there will always be someone who excelled in whatever you are doing, and you can, therefore, learn a thing or two from them. For Maeve, one of the people who have had a significant impact on her career is Tig Notaro due to her comedy and stage presence. When Maeve saw Tig pushing a stool for five minutes, the young actress realized that one does not have to follow what everyone else is doing, and adding your touch to something is okay. Besides Tig, Maeve confessed she loves Joan Rivers, Louis C. K. Richard Pryor, and George Carlin, who, in her opinion, entice the audience to have a new perspective of the world.

Maeve may not have been good at making friends but excels in her craft of making people laugh, at only 8, the teenager made her debut in 2012 in the feature film titled “Theresa is a Mother.” After that, her star kept on rising, and when she was 13, Maeve became the youngest comic ever to be booked at Broadway Comedy Club, New York. Further, she is the youngest comic to ever perform at the Boston’s Women in Comedy event.

Maeve is already a celebrity in her own right, but her social media pages do not reflect that. While many celebrities will boast of millions of fans on the various platforms, Maeve can only boast of a few hundred. On her Facebook page, her followers are only 216, which is quite a low number for a page that was created in July 2016. The numbers are almost similar on Twitter since she only has 234 followers. Instagram has been kind to her; she has more fans since the number is 4,993.

9. Her love for her sisters

Maeve uses every chance she gets to flaunt her two sisters. When Amaya Press celebrated her birthday, Maeve posted on Instagram her best wishes for the little girl. In another picture, she tells her fans that her elder sister is the lead singer of a rock band, which could be translated to mean Maeve is proud of her sister’s musical talent.

10. She wants to continue pursuing acting and comedy

When Refinery29 talked to Maeve Press about her plans, the teenager said she wants to do more of acting, writing, and comedy. The girl does not want to choose one over the other and is currently in the process of writing a solo comedy show. As for her future acting roles, Maeve prefers characters that act as a voice for those who cannot speak up.