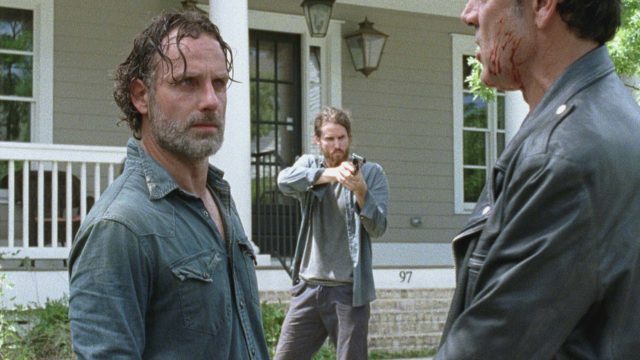 Many successful television series have opted to bow out gracefully while still at their peak. Is AMC’s “The Walking Dead” ready to do that before ratings plummet further. Now almost halfway through its eighth season, the show about survivors of a “zombie” apocalypse, feels stuck in a cycle. The characters of the surviving group have evolved and we’ve been able to see their complexities. Because the show is based on a successful comic book series by Robert Kirkman, fans can entertain themselves speculating how close the television series will follow the comic book series. However it Seasons 7 and 8 have disappointed even the most ardent of fans. Is it time to end ‘The Walking Dead?

Rick Grimes’ group of survivors have provided fans with excitement and fear during the course of “The Walking Dead”. The group members have developed throughout the seasons as they seek refuge from “the dead”, connect with other surviving groups, and ultimately seek to build a community that governs the living successfully. Along the way, the group, and fans, have lost members just as we start to love them like Beth and Noah. We have grown accustomed to that. On the eve of the Season 7 premier, fans were not surprised to see Abraham brutally killed, but Glenn was another story. The loss of a beloved character who had been there from the beginning was too much for some fans to take. The worst part of Glenn’s death at the hands of Negan’s barbed wire bat is that just a season before we were left to believe that Glenn had died in an ally filled with “Walkers” only to find out he miraculously made it out alive by crawling underneath a dumpster.

“The Walking Dead” has spent time developing certain characters only to have them brutally killed off just as they become more than one-dimensional. Fans expect this. After all, this is a show about a post apocalyptic world where both the “dead” and the living will stop at nothing to kill. In recent episodes of “The Walking Dead” it seems like the showrunners have spent a lot of time developing characters like Negan and Eugene. This seems to be a waste of time and fans are disappointed. Negan, like previous villains in the series, must have had a normal background.

The comic books go into this. He survived the apocalypse the only way he could. We get that he is a dictator who uses others to satisfy his physical and emotional needs. He’s completely self absorbed and kills innocent people violently to serve his own survival needs. Fans don’t really need to continually see how Negan became what Negan became. He needlessly killed Glenn. That’s enough. He needs to die. Focusing on whether his group of “Survivors” need to go with him is tedious at this point

. “The Walking Dead” is focusing a lot of time on Eugene’s character. Did he turn to The Saviors for self-preservation or does he have a deeper level? Eugene was a comic relief character for so long. Fans like that. Anymore depth to Eugene’s character seems over contrived even if it is meant to move the endless and aimless current plot forward.

After Glenn and Abraham’s deaths “The Walking Dead” promised major revenge as Rick seemed to fall apart and regroup. Avenging Glenn’s death was the goal of everyone in the surviving group especially Rick whom Glenn had saved in the very first episode of “The Walking Dead” and Maggie, Glenn’s pregnant wife. However, the series went into a confusing mode. It introduced several other groups and separated many of our favorite survivors. Fans began to get board as story lines seemed aimless and some episodes were just boring. There was very little action during Season 7.

Season 8 of “The Walking Dead” started off with a big promise. Rick and his group had formed alliances with other groups to defeat Negan and The Saviors. We were promised “All Out War”. However, the story line started to feel recycled. Rick’s group is going to defeat another surviving group, but Rick’s group wants to govern for the good of all people and defeat the group that has turned to the dark side for their own survival. Season 8 has provided some frightening moments but mostly, it’s been about strategy and conflict of fighting The Survivors. We’ve seen some of the ally groups suffer loss in the fight against The Survivors.

We’ve seen Rick go to great lengths to get allies which doesn’t seem worth the risks, like The Junkyard group. We’ve seen Rick’s closest friends, Daryl and Michonne, question his war plan. Has Rick’s ego gotten in the way? Most of all, we haven’t seen much action during the first episodes of Season 8. Fans know that something big is coming in the Season 8 mid season finale, but is it worth the wait? Whatever major character death is coming, can we handle it after what happened to Glenn? The mid season finale had better be good to make up for the tediousness of the season so far. Fans of the series have always said, “If Daryl dies, we riot”. Daryl is not a character in the comic book series, so whether the fan favorite character lives or dies could make or break “The Walking Dead”. The loss or survival of some other favorite characters will also help fans decide if “The Walking Dead” is worth watching anymore.