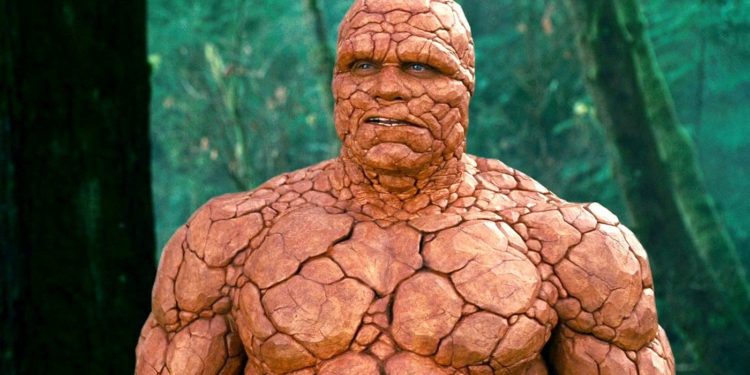 Plenty of fans have been trying to cast the perfect Fantastic Four movie since the rumors were heard that it was finally going to happen at the MCU, and a few interesting picks have been floated since then. John Krasinski has been a favorite for Reed Richards, while his wife Emily Blunt has been a pick for Susan Storm. Zac Efron is the popular choice for Johnny Storm, and it’s not much of a surprise that John Cena of the WWE is a solid pick for Ben Grimm, aka the Thing. There are a number of reasons why this should probably happen, but there’s a lot of trepidation when it comes to the FF movie simply because it’s been attempted a couple of times now and as far as Marvel fans are concerned, none of the three movies that have been released have done any good for the reputation of the team. There are so many complaints that sifting through all of them to find out which ones have the most validity would be kind of tough, but the Thing is one of the reasons why people have had issues with the movies since watching Michael Chiklis taking on the role in the first attempt wasn’t exactly great since the bodysuit was designed fairly well, but for some reason, he still didn’t quite have the vibe that people were looking for from the comics. It could have been that he wasn’t as big as his comic book counterpart, but in all honesty, he was one part of a truly disliked movie, so it’s not fair to put it all on his shoulders. But when Jamie Bell came in for the 2015 version of Ben Grimm it wasn’t any better according to a lot of people. Personally, I thought the CG Thing looked decent since he was huge and looked pretty rough. Fans still weren’t impressed, and many other elements of the movie just didn’t click for a lot of people.

One reason why this would work is that in the comics Ben Grimm was a close friend of Reed Richards, as the two met as freshmen in college. Ben did grow up in poverty but when he went to live with his uncle he excelled in sports and school and went on to attend college and graduate. He joined the U.S. Air Force and became a pilot and eventually an astronaut. This played well into the idea that when he and Reed were freshmen, Reed said he had plans to build a starship, and Ben jokingly said that he would pilot the ship if Reed built it. Well, Reed built it, and Ben kept to his word. The point here is that John Cena can play an intelligent character but he can also be a very aggressive person as well. Given that he’s getting older at this point it might be that someone would need to step in if the movie does explore an origin story, but it does feel as though it can do without it since to be realistic, a lot of people know how the FF were given their powers at this point, and exploring another origin story feels like it would soak up too much time. But another reason that John Cena would be a great candidate for this part is that he’s already a big guy, heavily muscled, and definitely capable of being intimidating. But if he was given the benefit of CG he could become even bigger and the effect, if done correctly, would work in a way that would likely give the fans the Thing they’ve been wanting.

Plus, how great would it be to hear “It’s clobberin’ time!” as it was spoken with John Cena’s voice? It also feels as though he and Zac Efron could work together in a very efficient manner since the dynamic between Johnny and Ben in the initial two movies was that Johnny was constantly making fun of and teasing Ben while for his own part, Ben was able to get his payback here and there. It does feel as though John and Zac would be able to make this work and create a type of rivalry/rapport between the two characters that would be kind of fun since Johnny Storm has always been kind of a carefree and less than responsible individual while Ben has always been kind of a grump and dour individual that knows how to have fun but isn’t always up for Johnny’s antics. As a movie idea, it could definitely work, and it would be a lot of fun to see them all on the screen. The sad part is that Emily has already stated that she’s not interested and would only want to take part in the MCU if the role she was given was something exciting. Oh well, if the three others were mentioned make it in, it’s still possible to find a Sue Storm.