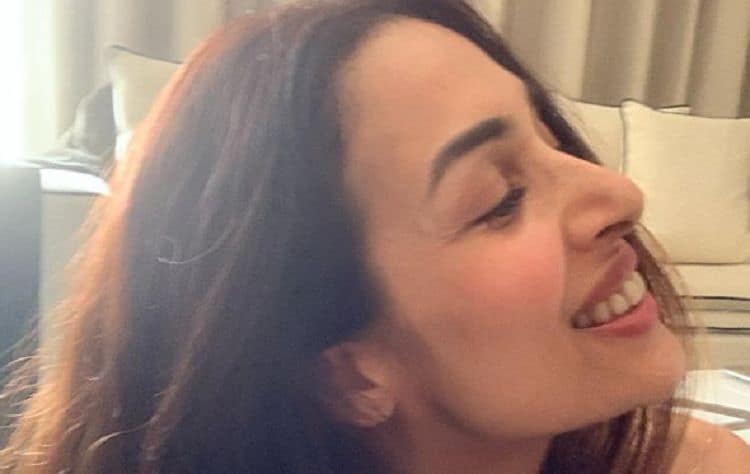 Indian actress, dancer, video jockey, model, and television presenter Malaika Arora is one of India’s most famous exports. Known for her work as a judge on India’s Got Talent, her performances in a string of highly successful movies, her hosting gigs on MTV, and her long-standing modeling career, she’s clearly not short of talent. While she may prefer media focus to rest squarely on her professional career, Malaika’s personal life has commanded its fair share of headlines, firstly during her marriage (and divorce) to actor-producer Arbaaz Kha, and most recently with her on-off relationship with Bollywood actor Arjun Kooper. To find out more about the star, read on.

Malaika began her career at the age of 17 when some of the shots she took with professional photographer Suresh Natarajan fell into the hands of Suma Varghese, the then-editor of Society magazine. Malaika’s photographic good looks clearly impressed the editor, and she was commissioned to feature on the front of the magazine’s April ’93 edition. Malaika subsequently went on to appear in numerous campaigns for brands such as Pearl Pet, Bare Necessities, Mafatlal, Benzer, Tanishq, Tribhuvandhas Bhimji, and De-Beers.

2. She was one of the first VJ’s on MTV India

Malaika first came to the public’s attention when she was selected as a video jockey by MTV India, which was just beginning to roll out its network across the country. After starting out as an interviewer on such shows as Club MTV, she later graduated to co-hosting the popular Love Line and Style Check alongside TV anchor, Cyrus Broacha. Malaika took to her hosting duties with aplomb and clearly had a great time at it, telling Screen India: “Its great fun being a VJ. I have a really good time doing a show like Club MTV. One is constantly learning different things by talking to so many people and interacting with them.”

3. She prefers modeling to TV

Malaika started out life as a model, and despite quickly making her name for herself on TV, she didn’t lose her love for her first career choice. “It feels very incomplete if I’m called a VJ,” she told Screen India. “Modelling is such a great profession, we get to travel so much. For almost 15 days in a month, I’m out of the city doing shows. And whenever I feel a little loaded, I just take off. Recently, I’ve been to America, Spain, and Morocco. But, I’m a complete beach person. I just love the sun and I also love food. That’s probably, one of the reasons I like to travel.”

The early 2000s saw Malaika start to make the move from the small screen to the big one. Her first appearances on film came courtesy of cameos in the likes of Bichoo (2000), Maa Tujhhe Salaam (2002), Kaante (2002), and Om Shanti Om (2007). Her first major role was as Nancy in EMI (2008), a Bollywood social film starring Sanjay Dutt, Arjun Rampal, Urmila Matondkar. Unfortunately, the film proved a box-office flop, but that didn’t stop Malika moving quickly on with new projects like 2009’s Hello India and 2010’s Houseful.

In March 2011, Malaika hit the record books when she led 1235 others in a choreographed dance routine to “Munni Badnaam Hui”. The record-breaking performance followed her 2010 rendition of the song in the film Dabangg, which coincidentally, was directed by her then-husband, Arbaaz Khan.

In 1998, Malaika married Arbaaz Khan, an actor, director and producer who she met while shooting a coffee commercial. 14 years after welcoming their first (and only) child, the couple announced they’d split following “irreconcilable differences”. Divorce proceedings followed swiftly on, and by May 2017, their marriage was officially over.

7. She has famous connections

Malaika isn’t the only member of her family (both immediate and by marriage) to have achieved household-name status. Her sister is Amrita Arora, a model, presenter, VJ and film actress known primarily for her performances in Ek Tho Chance (2009), Speed (2007), Om Shanti Om (2007), and Awara Paagal Deewana (2002). Her former brothers-in-law, meanwhile, are the acclaimed Bollywood actor Salman Khan (known for Maine Pyar Kiya (1989), Andaz Apna Apna (1994), Khamoshi: The Musical (1996), and Hum Tumhare Hain Sanam (2002)) and the actor-director-producer, Sohail Khan (known for his directorial debut Auzaar (1997) and his follow up features Hello Brother (1999), Jai Ho (2014), and Freaky Air (2016)).

As a judge on India’s Got Talent, Malaika is used to asking others to share their hidden talent for the entertainment of the nation. When it comes to her own gifts, she’s happy to share she’s a whizz in the kitchen (although what she’s cooking up in there, she didn’t reveal), and can play the flute with aplomb. While worthy of credit, she’s the first to admit such talents probably wouldn’t take her through to the finals of IGT: “I can cook really well. I play the flute really well. These are things I don’t go on stage and showcase. I’m also an adrenaline junkie,” she told the Times of India.

9. She’s amicable with her ex

Despite divorcing several years ago, Malaika remains on friendly terms with her ex, Arbaaz Khan. However, Khan has been dismissive of any hopes of a reconciliation, telling DNA: “I feel, if we had to get more time, we would have got back by now. The fact that we haven’t, means it is not meant to be. So I guess if that was to happen it would have happened in the first six months, or one year. It didn’t and it’s been almost three years now…”

We already know Malaika is a great dancer, but she’s also a fitness fanatic who loves nothing more than motivating her fans to get active by sharing inspirational snaps of her working-out. Under a recent Instagram picture of her doing the splits, she posted “Doin yoga or any form of exercise makes me happy, energized, focused, but above all CALM …..#malaikasmondaymotivation…. make this Monday n every Monday count”.