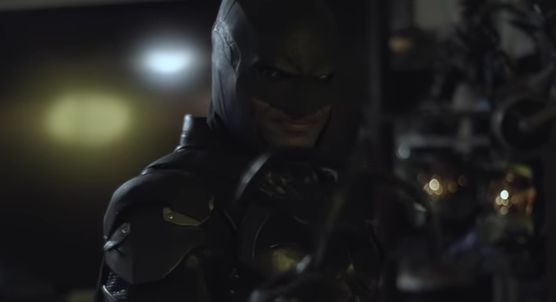 Each of us deal with the daily rigor of life in our own ways.Â  Some of us come home from work to a stiff drink.Â  Others grab a hold of their children and just “shut off.”Â  Some take naps or put on their favorite TV programs.Â  We each figure out our ways to unwind and detach from the work we endure on a regular basis.Â  However when you hear about how Stephen Lawrence winds down, it might sounds a little strange.

Stephen Lawrence, who lives in Brampton, Ohio becomes Batman at night to channel his grief after ending his shift at his manufacturing job.Â  He has what many would consider to be a “Bat Cave” in his home.Â  The amount of Batman items he had is endless.Â  His suit is incredibly accurate and looks exactly like the ones from the films.Â  He’s got the gadgets, a sword, anything you can possibly imagine.

At first you might look at this story and laugh.Â  I mean frankly it sounds kind of ridiculous.Â  However, none of us know or understand Stephen’s life and if this is what keeps him sane and on track, then more power to him.Â  It’s better than going out and committing crimes or being a danger to society.