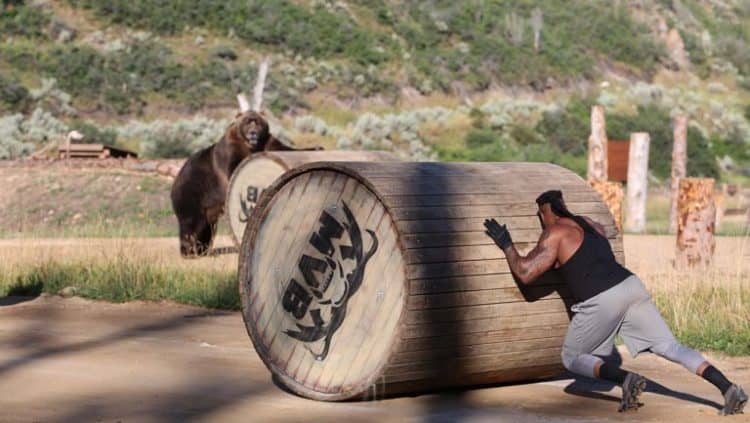 The human imagination can come up with some pretty strange concepts. For proof, look no further than Man Vs. Bear, which is exactly what it sounds like. The result is more than a bit juvenile, but it is absolutely hilarious because of that stupidity. Here are 10 things that you may or may not have known about Man vs. Bear:

1. Each Episode Follows the Same Formula

Each episode of Man Vs. Bear features three human competitors taking on three bears in the state of Utah. Their competition consists of various challenges based on the bears’ natural instincts as well as the bears’ predatory skills, presumably because that makes it much easier to convince the bears to cooperate.

2. The Bears Are Bart, Honey Bump, and Tank

For those who are curious, the three bears are named Bart, Honey Bump, and Tank. Bart is a male bear who happens to be the biggest in size. Meanwhile, Honey Bump is a female bear with plenty of ferocity packed into her. As for Tank, his most prominent trait is supposedly his voracious appetite.

3. The Bears Are Grizzly Bears

4. Grizzly Bears Can Be Dangerous to Humans

5. Grizzly Bears Tend to Attack When Caught By Surprise

In most cases, grizzly bears attack humans when they have been caught by surprise. This is important because grizzly bears respond to perceived danger by standing their ground against the aggressor, particularly when they are seeking to protect either their cubs or their food. With that said, there are exceptions to this rule, which is one more reason why people should be very cautious of grizzly bears.

6. The Bears Are Not Domesticated Animals

Some people might be curious about whether the bears featured on the show are domesticated animals or not. If so, the answer is an unequivocal “No” because there has never been a domesticated bear species. Never mind grizzly bears. Essentially, a species cannot be considered domesticated unless there has been a multi-generational process in which humans have assumed control over their care as well as their reproduction for the purpose of securing some kind of resource from them in a more predictable manner than otherwise possible. Grizzly bears have a lot of strikes against them when it comes to the question of whether they can be domesticated or not, with examples ranging from them being ridiculously dangerous to them lacking social mechanics that can be exploited for ease of domestication.

7. The Bears Are Not Quite Tamed Animals

Having said that, the bears featured on the show aren’t quite 100 percent what a lot of people would consider to be wild animals. This is because they have had a fair amount of interaction with humans, though it would be exaggerating to say that they are tame animals. In fact, it is questionable whether grizzly bears can even be tamed because they are very much wild animals that live by their own understanding of how the world works rather than by human expectations.

8. The Bears Win Everything

9. The Challenges Are Based on Bear Things

10. The Bears Are the Stars of the Show

One of the competitors on Man Vs. Bear has outright stated that the bears are the real stars of the show. This makes sense because it is much more fun to watch the bears rather than the human competitors in action. Moreover, it should be mentioned that while the human relationship with bears is shaky at best, bears have somehow managed to muster up enough charisma to claim a place in our hearts. Otherwise, one would be very hard-pressed to explain the continuing popularity of teddy bears as well as the various other ways that bears show up in human media.