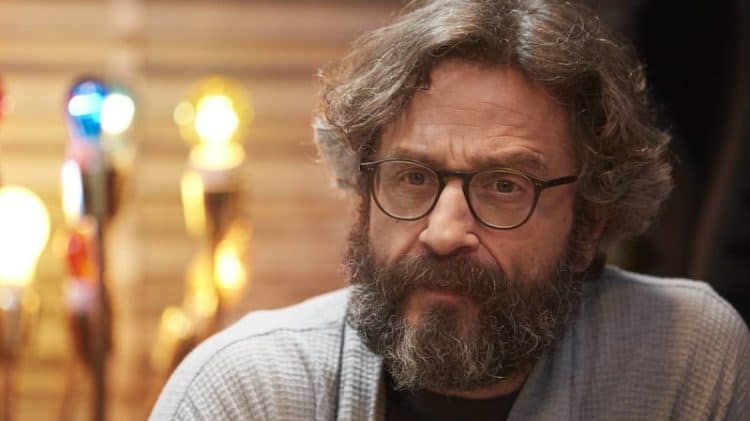 If you don’t know who Marc Maron is it might be time to look him up and actually enjoy him as I have just in researching the man. As a writer, a comedian, and an actor he’s someone that’s easy to get behind for some of his views and look at as kind of a polarizing figure for others. In other words he’s not always a balanced individual but he does follow the course that he sets for himself and doesn’t often deviate from it for anyone or for just anything that catches his fancy. In a world where the bright, shiny, and new things that capture our attention are often what we choose to focus on that’s kind of impressive since it means he has a set of principles that don’t allow him to simply give in to anything and everything that comes along and he’s been able to maintain his integrity for a long time now, at least in theory.

10. He started performing standup when he was 24.

Considering that he’s in his late 50s now it would seem that he knows a thing or two about comedy and might be able to school a few people in the art of making others laugh. It’s a great skill to have since quite honestly it helps more than it harms.

9. Marc had a drug and alcohol problem in the 90s.

It seems like the 90s were a rough time for a lot of people as the drug flow was constant and entirely too available for those that had the means and the desire to use it. He’s been clean and sober for a good long while now and has been enjoying life away from the substance abuse.

8. He’s been nominated for a few awards.

He hasn’t won any major awards but it does seem as though he’s gained the type of notice it takes to make a person worth more than a little something in the business. The nominations tend to keep people a bit more hungry and willing to push themselves a little harder, or at the very least are appreciated as a person continues to do what they know best since in all honesty it seems that at times the craft is more important than the award.

It’s kind of amusing to hear how people talk about Kinison since on stage the guy was nothing but loud and obnoxious, but he got laughs. As we’ve all seen in the movies though he could be soft-spoken and respectful as well, but the real Kinison is someone that a lot of people happened to wonder about.

6. He had Barack Obama on his podcast once.

It sounds as though he had to ask neighbors for the permission to put Secret Service agents on their roofs to keep the president safe and secure, as you might expect. That might have seemed kind of odd to people, but also kind of standard.

5. For a long while he and Jon Stewart were on very poor terms.

It sounds as though there was a lot of jealousy and resentment there for a while that had to be pushed through. Thankfully Marc brought Jon on his podcast and they managed to get through a lot of those feelings and buried the hatchet so to speak.

4. He’s been a comedy writer for quite a while.

When you’ve been writing for a while you tend to get a good sense of what gets attention and what will essentially fall flat and Marc seems to have learned a great deal over his time in the business and has benefited greatly from his craft.

For a writer this seems pretty accurate since honestly, when compared to actors and other celebrities, writers don’t often get much attention or even credit other than the paycheck they collect at the end of a gig. It’s not the big time but then again it’s not why a lot of writers get into the business. They enter the business because they have a story to tell, or the skill to help tell those of others at least.

According to Matthew Dessam of Slate Maron went on the Conan O’Brien show to dispel the rumor that he was in Avengers: Endgame since it was thought that he played the part of a young Stan Lee. He also claimed that he didn’t really care for MCU movies that much.

Marc does have a good number of followers and is followed by a lot of people that might be inspired by him or at least enjoy what he puts out.

It might be time to give him a look.