Home
TV News
Marie Kondo Gets Her Own Show on Netflix 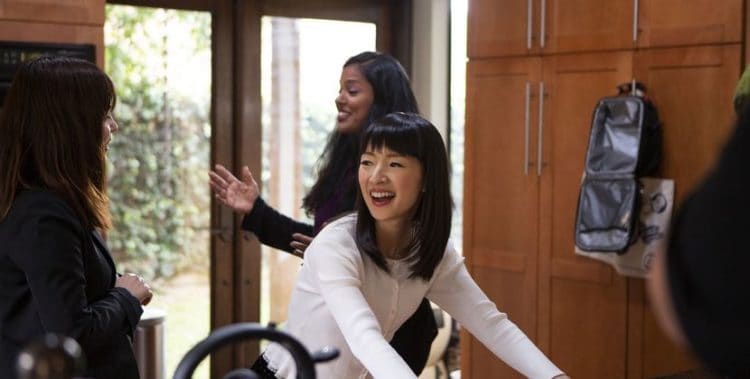 Marie Kondo’s new show Sparking Joy sounds like a good idea and it probably is, but so long as one is a fan of the home-centric type of shows that feature various ways to organize and possibly redo the interior of your home to keep down the clutter and take joy in your own space. From home improvement to redecorating to whatever Kondo will be showing people how to do, home-centric shows have been a big part of TV for a while and have shown a lot of people how they can fix up their space for a decent amount of money or nothing at all depending on what’s being done. With her previous show, Tidying Up With Marie Kondo she showed people how to de-clutter their homes in a way that would offer more space and a much more livable area. It’s hard to say what she’s going to do when her show hits Netflix, but it’s fair to say that a lot of people are probably going to tune in to see what she’s offering. For some folks, it might be worth it, and for others, it will probably be something they’ll watch or ignore since they have their own ways of staying comfortable in their home. Marie’s show is definitely one among many that serve a niche that’s not universal but is still seen as necessary for those that want to fix up their space and don’t have the knowledge of how to do this.

The mention of having to quarantine for so long has been made when it comes to this show, and it’s true that a lot of people have had to stay home over the past year since the pandemic has been a truly disruptive force in just about everyone’s life, but not knowing how to organize one’s home is kind of hard to believe. Maybe some people didn’t develop this kind of skill while growing up or weren’t taught, or simply don’t care. But taking joy within your own space is kind of an individual thing since there are plenty of introverts that happen to like their homes the way they are and might even change things up now and then to see how something might work in a different way. Marie’s show might be interesting for such folks, or it might be something they’ll avoid since they don’t really need any further ideas when it comes to redecorating or rearranging their home. In other words, this show is bound to be useful for many people, but as far as being a universally-loved idea, it’s not likely that it will be embraced as readily by some folks since they might already know how to take care of the interior of their home. To those that watch though it will no doubt be invaluable since Marie has been proven to be quite good at what she does.

Her organizational skills are exceptional to be certain, and the fact that she’s written about this matter and sold millions of copies of her books is fairly impressive since it shows that she knows what she’s talking about. It’s also comforting to know that those that do want to learn from her will be able to confidently say that they’re following someone with experience and with ideas that can actually work since too many YouTube personalities these days, those that are all about ‘helping’ others in any case, are typically those that don’t have their own lives together and are probably the last people anyone should be learning from. To be fair, some YouTubers are knowledgeable individuals, and it shows since their ideas are sound and can actually work. Some of them unfortunately are those that are on YouTube to try and get paid for something that they might know a little bit about, but not enough to go teaching anyone else, since much of what they do is rife with bad habits that skew the results in a big way. Just to balance out the argument, the level of success that a person experiences when following the advice of a YouTuber, Marie Kondo, or anyone that tries to teach them something, is highly dependent on the effort put forth by the person trying to learn. How well a person listens, how they apply the knowledge that’s being given to them, and how well they can tamp down their own ego will make a huge difference when it comes to experiencing the kind of success that they want.

The show is supposed to be hitting Netflix this coming summer, and it can’t happen soon enough for a lot of people that are eager to learn more from Kondo on how to maximize the joy they can get from their own personal space. After all, if one has to be stuck at home, they might as well enjoy it.