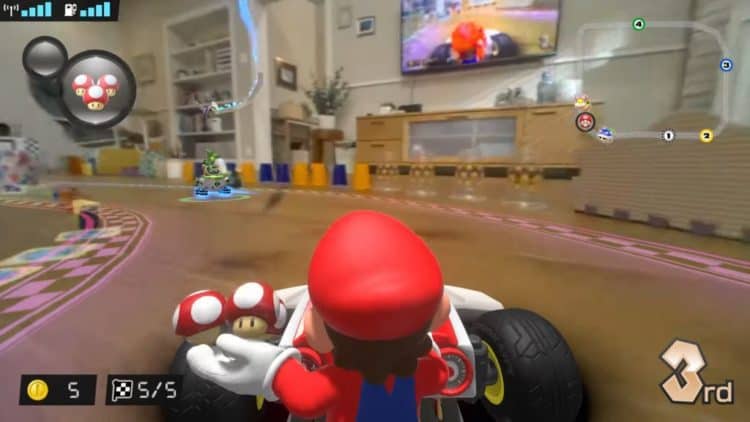 Admit it, this would be a dream come true for a lot of fans of Mario Kart since there are a lot of people out there that happen to love the game and would like to see if it could become a little more personalized now and again. This would be pretty cool since it turns your home into the racetrack and apparently can be played with more than one individual thanks to these cool racecars that contribute to the game. The only thing that might be kind of hard would be if there were any pets in the house since this might not be an obstacle that the game knows how to deal with, but then again it could be that you’ll just have to outmaneuver the family pet and keep going. Apart from that however all a person needs is the right type of floor and enough space and they’re good to go. It’s hard to say just how well these cars would roll on carpet, but then again there are carpeted floors that aren’t too hard to navigate, while others might be a little too plush and could impede the movement of the cars. So a hardwood floor or other surface is probably the best for this game, especially since to get the full enjoyment out of it one is going to need plenty of available space that can be converted into the track.

Mario Kart is definitely one of the many games that are just as fun for adults as it is for kids since both manage to get a lot out of it, plus the game is enough fun that if someone has a grievance to air out of frustration to get out this game can help that person to loosen up and take their aggression out on the other players, in a way. Plus, as a game played among friends it’s one that is just challenging enough that it allows people to really get into the fun and come up with a way to beat each other up, in a friendly manner, without leaving any hard feelings behind since there’s really no way to cheat or gain an unfair advantage. As far as games go, Mario Kart is one of those that manage to be fun on many occasions since it can be a way for a family to bond, a kid to just have fun for a while, or an adult to use as a way to unwind. Video games aren’t just for kids after all, as this has been proven quite a few times in the recent past. The truth is that video games can lead a person to grow just as angry and frustrated as anything since those that are a bit too difficult or don’t appear to cater to the user as much as they demand almost utter perfection, can in fact be enough to make a person through a controller and want to break things. But a game such as Mario Kart is easy to laugh at, easy to have fun with, and definitely far more cathartic than many others.

That’s the joy of video games, at least some of the time since they can allow a person to just kick back and relax and enjoy the experience. There’s not a lot of story to Mario Kart that a person has to pay attention to, nor are there any complicated special moves that a person needs to memorize in order to really get something out of the game. All a person needs to know is which controls to push in order to make the game work, and then how to outsmart their opponents. Aside from that, it’s just a colorful and fun time that’s waiting to be had since the enjoyment that a person can get out of this game is pretty simple and doesn’t need a lot of added thought. This current development is even better since it adds a more personal touch to the game and could be a lot more interesting in some homes considering the layout and the obstacles that might be put in the way. But as I mentioned earlier, a family pet could be a big challenge since dogs and cats are bound to find the actual car enticing and might take to chasing it throughout the house. That could be enjoyable too so long as the player could find a way to make this work while still playing the game and staying on course. Wouldn’t that be the entertaining video to post online?

Currently, this version of Mario Kart is available for pre-order and will be released on October 20th if all goes well. This should be a lot of fun for those that have the space to utilize and can purchase the needed materials.