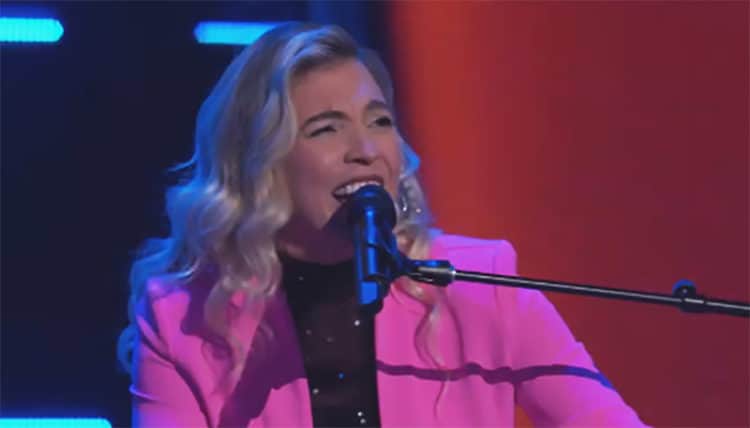 As soon as Marisa Corvo starting singing during her blind audition for The Voice, it became clear that she was working with some serious talent. Her performance of “Perfect” by P!nk might just be one of the strongest showings we’ve seen so far during this season. The Staten Island native was able to make every judge except for John Legend turn around and she ultimately decided to join Team Kelly. Marisa is hoping she makes it all the way, but even if she doesn’t there’s a very good chance that just being on the show will help her get to the next level of her career. Continue reading for 10 things you didn’t know about Marisa Corvo from The Voice.

1. She Is A Classically Trained Pianist

Marisa’s vocal ability has the power to make anyone turn their head, but singing isn’t the only musical talent she has. She is also a classically trained pianist who started reading music when she was just 3-years-old. By the time she was 6-years-old she was taking classes and well on the road to landing professional opportunities.

2. She Loves To Cook

Marisa comes from a traditional Italian family where food is a big part of the culture. With that being said, Marisa loves to good and she likes to throw down in the kitchen the same way she does on stage. She even prepared a nice meal for everyone on The Voice.

3. She Performed At Carnegie Hall

Getting the opportunity to perform at Carnegie Hall is one of the best experience an artist can have. Not only has Marisa performed at the legendary venue, but she was only 9-years-old when she did it. Something that can take many people decades to do was a bullet on Marisa’s resume before she even turned 10.

4. She Almost Gave Up On Music

Just because you really love doing something doesn’t mean it’s not possible for you to get burned out. That’s something Marisa knows all too well. By the time Marisa reached adulthood, she ahd already been working in the industry for more than half her life. When she was 21 she decided to take a break from music, but she couldn’t stay away and returned a few years later.

5. She’s A Proud Member Of The LGBT Community

For many members of the LGBT community, coming out can be a very scary experience. No matter how close you are to someone, you can never be sure how they’re going to react to news about your sexuality. Fortunately for Marisa, she has a very supportive circle and she felt comfortable coming out in her early 20s.

One of the cool things about The Voice is that contestants come to the show with varying levels of experience. Some performers are just getting started while others have already accomplished lots of cool things. Marisa came to the show with lots of experience under her belt. On top of the things we’ve already mentioned, she’s gotten the chance to perform with some of the biggest names in the music industry including Keith Urban and The Jonas Brothers.

7. She Auditioned For American Idol

The Voice isn’t the first time Marisa has decided to bring her skills on a reality competition show. She auditioned for American Idol more than a dozen times and finally got her shot in 2012. Even though she didn’t win, being on the show helped her get more attention.

8. She’s Dealt With Depression And Anxiety

Mental health is something that everyone should be taking into consideration, but there are lots of people who don’t feel comfortable talking about it. Marisa, however, has been open about the things she’s struggled with. During her early 20s, she started to experience panic attacks and also faced depression and anxiety.

When you’re trying to get your big break in the entertainment industry, social media can be a powerful tool to help you reach people. Marisa has used various social media platforms throughout her career and she started a YouTube channel back in 2010. Although she was inactive on the channel for several years, she popped back up with a post in late 2019.

10. Her Dad Is Also A Musician

Marisa’s love for music initially came from her father, Julius, who is a talented trumpet player. Not only did he inspire her, but he was a big part of her training during the early years. Her father is still an active musician and the two have performed together on several occasions.