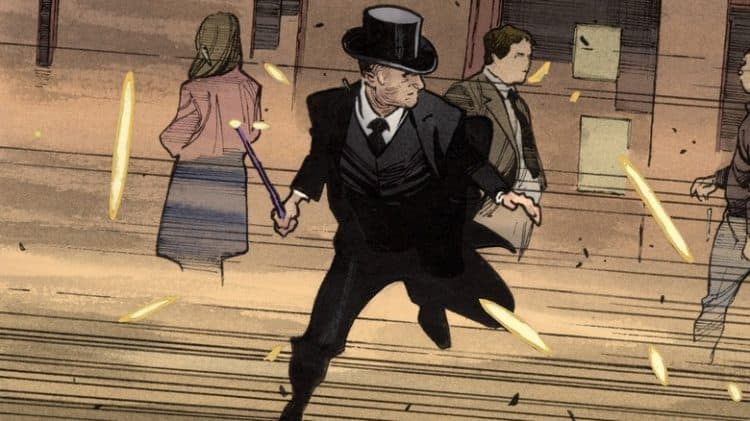 The coronavirus did a lot of damage that people didn’t always get to see when it decided to roll into the lives of so many and disrupt them in a manner that brought the world as close to a standstill as it’s been in some time. The entertainment industry suffered quite a bit since people couldn’t be within six feet of each other, meaning they couldn’t film, they couldn’t gather in large groups, and thus they couldn’t work on big projects save for online, which is nearly impossible for anything other than animated shows. But one of those projects that was in line to be produced, the Magic Order series that was created by Mark Millar, is apparently back in the works and will hopefully be allowed to keep moving forward as it’s currently in development. The premise of the project is pretty simple since it’s been described as a cross between The Sopranos and Harry Potter, which is an interesting mix if it’s even close to that since the organized manner of The Sopranos mixing with the magic of Harry Potter would be something interesting to see. Hopefully folks won’t be expecting hits being performed with magic or something similar since it does sound as though the purpose behind the story is something that Millar has been thinking of since he was younger. The idea of people existing in society and dealing with threats that people fear but know next to nothing about would be intriguing, to say the least. It’s not exactly an idea that’s never been done before since plenty of movies and TV shows have come along throughout the years detailing those that operate in the shadows or in plain sight trying to protect the human race from monsters and threats that they can’t perceive or simply don’t pay attention to.

It does kind of paint humanity in a light that makes us appear less than attentive and perhaps quite ignorant, but the idea is also that such hidden threats are beyond the human scope for reasons that will hopefully be revealed in Millar’s story, as the explanation of unknown phenomena and the things that go bump in the night is something that many people tend to find alluring to the point of obsession. After all, humanity has, for a long time now, been highly interested in the idea that there is something in the world beyond their own scope of understanding, a world within or beyond the world that we know that operates under different rules and principles. This is what a lot of pop culture is focused upon since the worlds that are created and continued at times tend to appear as imaginative as one can possibly imagine, but also carry with them the idea that if such things were constantly visible and known to humanity that life wouldn’t be possible as it is now. Many things would change, the world as we know it would be a far more uncertain place, and the lives that we lead would be altered forever. That’s where such ideas the Magic Order come into play though since imagining that there are agencies that are built to specifically handle and even police the forces that human beings aren’t aware of is something that many an imaginative mind could run with in a number of different ways. The idea of magicians that exist among humanity to combat said forces and keep them in line is something that many people have attempted to show in movies and TV shows over the years, and it could be that the Magic Order will be just one more show atop the heap, but there’s always the chance that it could turn into something impressive depending on the content, the acting, and fan reaction.

Right now there’s no discernible release date for the show so we’re going to have to wait and see what happens in the coming months. The hope of course is that Millar’s series will be able to get up and running eventually so that people can see his creation come to life in an impressive way on Netflix. Another hope is that it will last past a first season since the streaming giant has developed a reputation for canceling shows after one or two seasons, which does come with a reason, but at the same time isn’t quite good enough for a lot of fans that want to see the various shows that have been canceled continue on other platforms. If Millar’s show is any different it’s likely that it will last for a season or two before such a decision is made, and will hopefully be kept around longer since this story feels like something that could inspire more than a couple of seasons at least. But as always, we’ll have to wait and see.