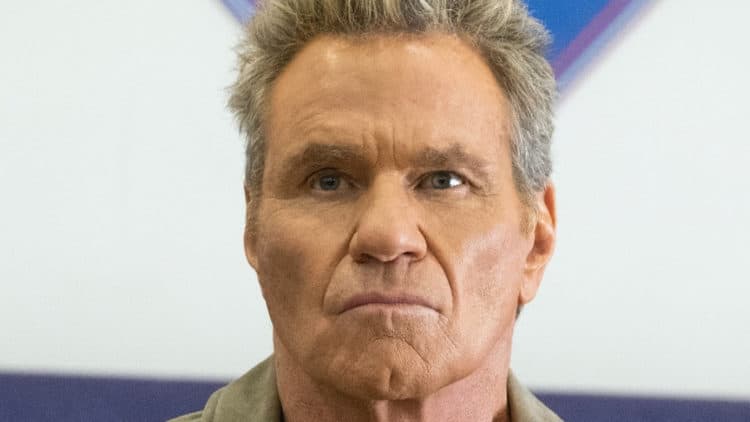 Initially, most people will gladly argue with Martin Kove concerning the nature of his character, John Kreese, and whether or not he’s a villain. In The Karate Kid I and II, he was more of a placeholder, a thinly-constructed villain that didn’t have a lot of depth to him and was there to be the big bad even though Johnny took the lead. In the third movie, he was shown as a down-and-out character that had lost everything when students stopped coming to his dojo after Cobra Kai lost the All Valley Tournament, and was in the process of giving up and moving on. His methods were still ruthless, he was still the hardened individual that people had come to know, but there was another layer to him in the third movie that we hadn’t seen yet since it was made clear that Terry Silver, a man worth more than Kreese had likely ever seen, owed him enough that he would do anything for him, which included bringing his dojo back. Once again Kreese got to be a villain, but once again he was suited up as the type of character one could hate but couldn’t really get a solid lead on. Cobra Kai has shown us another facet of Kreese that we’d never seen as of yet, a younger version that had every reason to be bitter and ready to lash out at the world.

A lot of people probably thought that in season 3 the character played by Kove’s own son Jesse was going to be a young Kreese, but when it turned out to be Barrett Carnahan, the young version of Kreese that was being bullied and had to stand up to his bully, people were rightly floored. Seeing Kreese as a vulnerable character, as we did in season 2 as well until he took over Cobra Kai again, was kind of disorienting, and it would appear that this is a part of what Kreese learned during his time in Vietnam under the cruel commander that tried to psych him out by telling him that his girlfriend back home had been killed in a car crash. It’s fair to say that when one is looking at their own possible demise and needs an edge that they’ll say anything, and it’s easy to see that Kreese’s sudden knowledge of his girlfriend’s demise did unsettle him more than a little. But eventually, the lessons that his commanding officer had taught him kicked in, and the ‘no mercy’ aspect of his persona kicked in, allowing Kreese to bypass his instinct to be merciful when he and his companions were about to be rescued. It also shaped who he would eventually become but in one of the worst ways. If we’re not going to call Kreese a villain, then we can at least call him an opportunist, someone who might not be fully good or evil but never misses out on a chance to take advantage when they see it.

One thing that Kreese hasn’t earned is the designation of hero since no matter that he did kill his commanding officer and save the life of one of his fellow soldiers, as well as the others, he still killed a man. He took the opportunity that was presented to him and was likely forgiven since it was a life or death situation, and the others would probably back him up. As life progressed, Kreese obviously became harder and less forgiving, punishing those that he figured needed the discipline and teaching others to act in the same manner. The switch had been hit in Kreese’s brain and thus affected his entire character, but what’s really troubling about Kreese is that figuring out that he does have a weakness, that there is another side to him, doesn’t really make him less dangerous or even easier to empathize with. In fact, it only makes him even more dangerous since this is the kind of guy that will take the mercy of others and use it against them, proving that he is an opportunist that has no intention of doing the right thing. He did come up hard and he has a lot more to his character than we initially believed, but there’s a reason that Johnny turned out as he did and is finally coming into the light, and it’s because Kreese taught him that the light was weakness, including mercy and respect that wasn’t beaten out of someone. Kreese might have fallen on hard times in season 2, but the first opportunity he found when Johnny took him back into Cobra Kai, he took it, and he twisted it into something that fit his own designs.

So no, he’s not a villain in the sense that he’s bad to his core, but Kreese is an opportunist that forgot what it was to forgive and to move on a long time ago. In other words, Kreese is weaker and softer at his core than most.