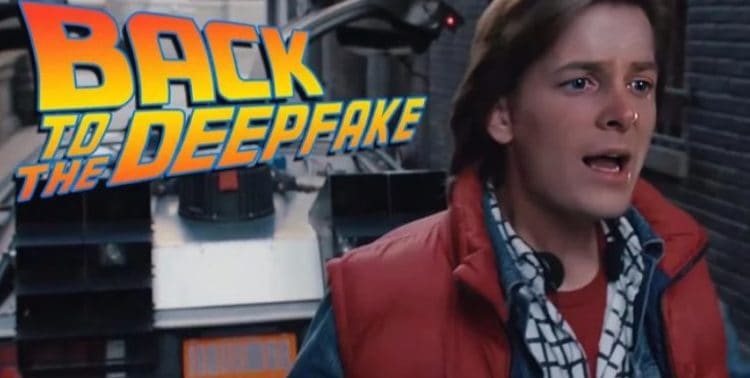 Deepfake is getting more and more elaborate as time goes on and is taking on even bigger projects as it’s shown, which is great really even if the facial features of Michael J. Fox kind of need to be fit a little better to the model’s head. It’s pretty easy to notice the shifting, and the voice is still a little off, but the overall effect is impressive and the idea of it is great since when you think of going to the future and how the original movies went down this is kind of funny. By the year 2015 we were all hoping that there would be flying cars, holograms everywhere, and technology that we just couldn’t have understood back in the 90s. Well, some of that stuff happened since technology has risen in a big way throughout the years, but holograms are still a bit problematic and as for flying cars, some folks can barely handle the ones that are stuck on the road. Instead we have flying sharks and YouTube videos for days and technology, which is supposed to make life a little easier and show how advanced we are, is used quite often for entertainment as well as the betterment of humanity, if it’s still used for that. Susie Poppick of Money has a few things to say that might shed a little more light on the subject. The vision we were given in Back to the Future part 2 was nice and all since it represented a good time and a prosperous occasion, but obviously the filmmaker was having a bit of fun and reality was going to take its own course regardless.

The future that we saw in the movie after all is kind of like a comic book version of what people would expect to see since flying cars, despite the fact that they’re still desired, are a bit problematic when you think about the number of car accidents we still see on the ground. Just think about a flaming wreck plummeting to earth after a mid-air collision and you might get the picture. Christopher Neiger of How Stuff Works can give you a better estimation of this. Thankfully though Deepfake was more concerned with Marty’s life as he begins to show his increasing lack of understanding as he meets the assistant librarian that turns out to be his son in the future. Of course before that the coffee shop is a great way to let people know that he’s in the current time since the number of items one can order at most coffee shops would make anyone dizzy after a couple of items and possibly kind of frustrated given that coffee has been complicated way beyond what it should be throughout the years.

If anyone else is getting a serious corny vibe throughout these videos don’t worry about it since Deepfake definitely went off on their own tangent here and it’s actually kind of interesting since even in the actual movies the tie-in to Marty Jr. was a bit much to handle. Believe it or not, Devin McFly is actually a cooler-sounding name than Marty McFly Jr., which just sounds a bit pretentious and not quite as unique. But of course Marty’s son had to grow up to be nothing like him since that’s the way things go at times and like it or not, our kids are not us and won’t make the same decisions. Sometimes that’s a good thing though.

One thing though, if someone came up to you on the street and started asking about where they could get plutonium, wouldn’t you be just a little bit worried, or creeped out, or, something? It’s not exactly as though they’re asking you where the local hardware store is after all, and anyone asking for a radioactive substance to power something might actually be tackled in this day and age and labeled as a terrorist. So really the benefit of Deepfake creating a video like this where there are few people around and Devin is basically a shy and reserved guy that doesn’t involve himself with a lot that doesn’t have to do with him is that there won’t be any altercations since Devin is just trying to help Marty out. Of course Marty would likely be freaking out to realize that Devin is his son, along with the fact that he’s become a major rock star that doesn’t spend enough time with his family and doesn’t seem to pay attention to them. And Devin’s mom telling her son to ‘have fun with the groupies’ seems a bit disturbing as well as telling since it would indicate that Marty is something of an absentee father and that Jennifer has learned to live with it. In any case Marty’s future reads like less of a bright and pleasing future than anything since fame has turned him into someone he’s not. Of course having learned this it’s easy to go back in time once again and, hopefully, not mess anything up.