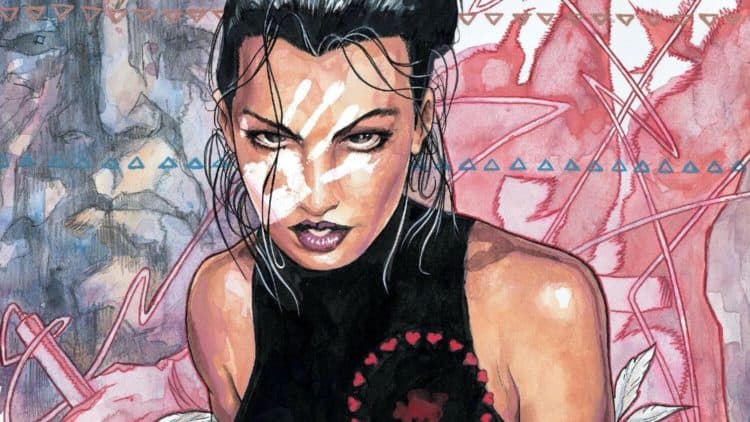 Marvel is definitely attempting to push forward at a breakneck pace at this point since the Hawkeye series that has been planned isn’t even here yet and there’s already a spinoff coming from it in the form of Maya Lopez, aka Echo. Upon reading up on the abilities she possesses it does feel that she’s akin to a female version of the Taskmaster since both of them can mimic the expertise of others just by watching them. Unlike Tony Masters though, Echo is hampered by the fact that she was born deaf and as a result has to be able to read the lips of those around her to know what’s going on. Plus, if she’s thrust into a situation where she can’t see what’s going on, she’s rendered almost useless despite her training, since being deaf and blind leaves her rather vulnerable. She is an extremely deadly fighter as she’s been able to pick up a host of fighting skills from the people she’s watched, so she’s no pushover when she’s in a situation that allows her the full range of her abilities. She’s even worn the Ronin costume that we saw Hawkeye take on in Endgame, so it’s very easy to say that Echo is no joke.

Anyone that can gain Bullseye’s precise aim and prove to be too much for Daredevil is bound to be considered as someone that’s equal to if not the better of many individuals in the Marvel universe since beating Daredevil isn’t a small feat for an earthbound fighter without any special abilities. Echo does have to actually watch a person in action before she can copy their movements and get them down, so it’s not as though she can download everything into her head all at once and simply know how to do it. In other words, she can’t pull a Neo and suddenly bust out with “I know Kung Fu”. But once she learns something she does have the advantage of being able to remember everything else that came before it, while Taskmaster, who’s just as deadly, tends to lose parts of his memory when he learns something new. Maya was once in the employ of the Kingpin, so perhaps her spinoff could work something like this into the mix. Who knows, maybe we’ll even see Daredevil and Bullseye return in this spinoff, which is something that many Marvel fans would love to see since people have been clamoring for DD to return since the Netflix show was canceled.

One has to wonder how many more spinoffs are going to be thought up before the MCU really starts unloading them all to Disney+ since the fact that plans can change if things tend to happen is always in the back of many peoples’ minds, but the disappointment that comes with it is there as well. Echo would be an interesting character to bring forward, but there’s also the issue of whether people would wonder about the idea of bringing Taskmaster in Black Widow and Echo so close together. It doesn’t feel as though it would be a huge problem, but it does feel as though someone might notice it. To be honest, it’s kind of interesting to think of who would be able to edge the other out in a fight between the two, since both Echo and Taskmaster would come to the fight with an incredible skill set. The only thing that edges the fight in favor of Taskmaster is the idea that he could possibly fight in the dark where Echo might be kind of lost unless she’s been taught to fight blindly, which is possible no doubt, given the level of skill she possesses. Other sensations can be utilized in a fight after all, even if they’re not quite as quick or acute as sight. But such a battle would be something that might be fun to watch. There have been beliefs that Taskmaster would be overwhelmed if he fought Echo hand to hand, but looking at all the variables and taking into account the intelligence and cunning of both individuals, it does feel that while Echo might be able to beat Taskmaster, he would still have a huge advantage she might not be able to top under certain conditions.

It’s hard to say if we’re going to get to see that at all since at this point it’s still a big question as to what we’re going to see in the eventual Hawkeye series, though it does sound as though Kate Bishop and the Swordsman will be there, so along with Echo, it sounds as though things are going to be getting pretty busy throughout the series. Yelena Belova will be showing up as well so one can only imagine what’s going to happen, but we’re definitely looking forward to it.