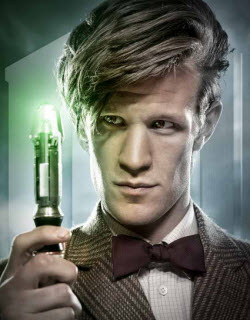 There’s been an interesting amount of talk recently about how there could potentially be a female Doctor in Doctor Who in coming seasons of the show. The bomb was dropped by Steven Moffat a few weeks ago.

“”[Attitudes to that idea] have been changing,” he said. “It is a part of Time Lord lore that it can happen – a Time Lord could potentially turn into a woman. The more often it’s talked about, the more likely it is to happen someday, I suppose.”

That set the internet aflame with speculation of if it was going to happen, when it would happen, and who might take on the role if it did. You might think that wouldn’t sit right with the current Doctor, Matt Smith, but you’d be wrong. He recently chimed in with thoughts on the idea, and even had a suggestion for which actress could replace him.

“Would it change the fundamentals of the character? No. But it’s an interesting idea, if the Doctor’s a woman, does she have a Doctor baby? Is there a mini-Doctor? I don’t know, who knows?”

“It could be… Charlize Theron is pretty kick-ass, isn’t she?Â They just have to find a brilliant actress. I never see that happening any time soon to be honest.”

I assume he means the female Doctor thing won’t be happening any time soon, not that they can’t find a brilliant actress. As for Charlize? I’m not sure she’d pry herself away from Hollywood to do such a thing, but I suppose anything’s possible.

It does raise a lot of questions like the ones he poses. Additionally, I would wonder if The Doctor would still keep his fancy for young ladies, even if ‘he’ was a ‘her.’ Or with a gender swap, do we get an orientation swap as well? It might be a complicated plot maneuver, but it could shake up the show in a way that hasn’t happened in decades.

Check Out These First Look Photos for The Minions Holiday Special