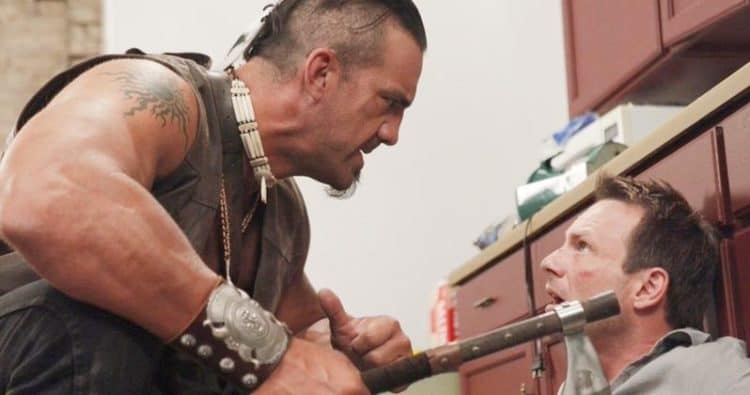 Most people are lucky if they get to do just one of the things they love during their lifetime. Matthew Willig has been fortunate to do two. On top of spending more than a decade as a professional football player, Matthew has also had a successful acting career. His large stature has made him the perfect fit for playing intimidating characters, but he quickly proved that he can do much more than that. He has appeared in dozens of on screen roles over the years and is known for being in movies and shows. Now Matthew is getting ready to add another cool acting credit to his already long resume. He was cast as Andre the Giant in the upcoming TV series Young Rock.  Here are 10 things you didn’t know about Matthew Willig.

1. He Got Into Acting In College

Matthew didn’t grow up with the idea that he would become a professional actor, but there’s something about performing that has always drawn him in. It wasn’t until college, however, that he gave acting a try. When describing how he got into acting he told Sporting News, ” I started when I was at Southern Cal, a senior, and I was good friends with the head trainer and he approached me one day, after my senior season, and said, ‘I have a buddy who’s making a film. Would you be interested in a part?’”

2. He Wasn’t Drafted Out Of College

Matthew’s story is a true example of what can happen with a little perseverance. Even though he went on to have a very successful career in the NFL, Matthew actually didn’t get drafted after college. He still managed to join a team and he went on to play for 14 years.

Matthew is very proud of all of the things he’s accomplished in his professional life, but nothing makes him quite as proud as being a father. He has two daughters who he loves spending time with whenever he can. There isn’t much information out there about his dating life although he does appear to be married to a woman named Christine.

4. He Has A Complicated Relationship With His Faith

Matthew was born and raised in the Catholic church, however, he openly disagreed with the church’s stance against gay marriage. During an interview with Out Sports he said, “When you grow up in a Catholic upbringing, and the conservativeness of that, and I’m still a practicing Catholic, I struggled with how the Church stood on that. I also see the complete hypocrisy that goes on with the Church, and their stance on gays, and the things that go on with the Church. That was the struggle I dealt with.”

Some people may look at Matthew and think of him as a football player who just happens to do some acting on the side, but that couldn’t be further from the truth. When it comes to acting, Matthew is the real deal. In addition to his live action work, he has also had some voice roles. He was even in the 2010 video game Spider-Man: Shattered Dimensions.

Due to his size and demeanor, Matt has often been typecast to play big mean characters. While he’s always thankful to have an opportunity, he doesn’t want to be seen as only being able to play a certain type of character. He loves the challenge of playing different roles and it’s something he looks forward to.

7. He Was In An Episode Of iCarly

When you think of a kids’ show like iCarly, Matthew probably isn’t the first person who comes to mind. What many people may not know (or remember) is that he appeared on an episode of the show back in 2008. He played a character named Sledgehammer.

8. He Suffered Concussions During His Football Career

During his football career Matthew told Sporting News that he did get a couple of concussions during his career but he was fortunate not to have any permanent damage. In 2015, he had a role in the movie Concussion which told the story of Dr. Bennet Omalu who helped uncover just how deadly these injuries can be.

Matthew spends a lot of time working, but when he gets a break traveling is one of his favorite things to do. Thanks to his career as an athlete and his work as an actor, Matthew has gotten the chance to travel all over the United States and outside of the country.

10. He Doesn’t Have A Big Social Media Following

Since there’s no doubt that Matthew has built a very large fan base throughout his career, the fact that he doesn’t have a huge social media following is somewhat surprising. On Twitter he has less than 3,000 followers and on Instagram he has just over 3,200.