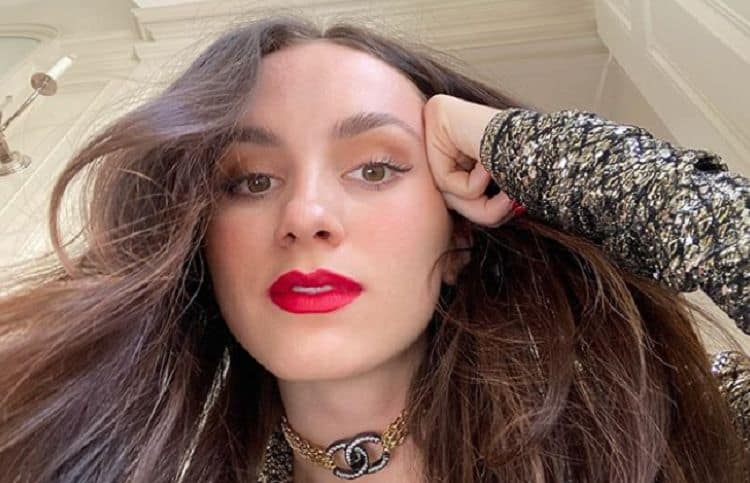 If Judd is the only Apatow you’re familiar with, it’s time to get informed. 22-year-old Maude is fast on the way to making as big a name for herself as her famous parents (her mom is actress Lesley Mann)— no easy task when you come from acting royalty, but one that, judging from her career so far, she’s well on the way to achieving. Currently starring as Lexi Howard in HBO’s must-view high school drama, Euphoria, she’s a name you’ll be hearing a lot more of in the years to come.

As the child of one of the most prolific producers and directors of recent times, it was almost inevitable that Maude would end up on screen at some point. Her first appearance came when she was just 9 years old in Judd’s R-rated comedy, Knocked Up [2007]. Whether it was her talent or just pure nepotism at work, the young actress was subsequently cast in two more of her dad’s projects, 2009’s Funny People and 2012’s This is 40, before emerging from under his wing to take center stage in her own right.

Both Maude and her sister Iris rose to fame on social media, with Maude, in particular, gaining a huge following when she live-tweeted the Royal Wedding of Prince William and Kate Middleton. Her bright, funny tweets soon started generating more and more interest, and within next to no time, she’d become one of Twitter’s biggest teen sensations. When Harry Styles of One Direction fame tweeted her with a “Happy Birthday” message, her Twitter-lebrity status was set.

After people started catching onto just how big a social media star Maude was becoming, the offers started rolling in. After Sophia Rossi, one of the cofounders of the website hellogiggles.com, reached out, Maude became a regular contributor to the site, getting the chance to interview everyone from Simon Cowell to Cody Simpson.

4. The Scariest Experience of Her Life

Maude’s biggest job as a writer, and also her most nerve-wracking, was a Teen Vogue interview with One Direction, which happened just at the moment the band was hitting the peak of its fame. Despite being psyched by the opportunity to meet the guys, she found the experience more than a little overwhelming. “I have never been so nervous in my entire life,” she started the article by revealing. “My legs did not stop shaking. When I get nervous my voice gets very high. My voice was so high that it was painful and embarrassing to listen to the tape of the interview. I have since destroyed it.”

5. Looking to the Girls for Inspiration

Judd and Lesley, look away now. Despite following in her famous parent’s footsteps, Maude is looking outside the family for inspiration. Keen on moving beyond acting into the realms of directing and writing, she’s looking to other women in Hollywood who’ve managed to make their mark in the traditionally male-dominated side of the industry. “I really look up to Lena Dunham, who writes and directs her show [HBO’s Girls],” she shared with Teen Vogue. “And Sofia Coppola, who directs her own movies. That’s something I might want to do when I’m older.”

6. Beauty Advice from Her Mom

Despite having an actress for a mom, Maude is loath to rely on her for advice on her career- at least according to Mann herself, who spilled the beans to Closer Weekly. “She doesn’t really listen to me,” Mann revealed. “I try, but she doesn’t listen.” She does, however, look to her mom for guidance on all things beauty related, unlike her younger sister Iris. “Iris doesn’t really care what I have to say,” Leslie revealed. “Maude does a little more than Iris, and then I care what both of them have to say. That’s how it works!”

Maude was named after the quirky protagonist of the film, Harold and Maude. It started as a joke while Mann was still pregnant, but by the time of her birth, the name had become too entrenched for them to consider anything else. Fortunately, Maude’s a fan of the film, as she shared with WM Magazine. “I think I was too young, like eleven (when I first watched the film),” she said. “I liked it then, and then I watched it recently, and liked it way more. My parents told me recently that they start calling me Maude when my mom was pregnant as a joke, and then it stuck. And, I was like, “Oh, that’s kind of offensive. But, okay.” But I love that movie. I think it’s one of my favorites ever.”

Maude started acting when she was in second grade, regularly performing in school productions and musical theatres. However, it wasn’t until she signed up for a community service program that she realized it was her calling. “We performed at different venues like a center for the blind, and for adults with developmental disabilities, and rehab centers, and it was an amazing experience,” she shared with Nylon. “Watching people watch theater and love it and really be affected by it was life-changing. After that, I was like, ‘Oh, of course, this is what I want to do.’”

If we admit it, we’re all a little bit fascinated by high school dramas, even if our own student days are long behind us. The obsession with teen culture (which has no doubt contributed to the success of her current show, Euphoria) is one Maude understands only too well. “They have no idea what they’re doing, which makes them interesting,” she explained to Interview Magazine. “They’re trying to figure things out. Characters who are finding themselves, that’s very compelling to watch, and I think when you have complicated characters who are feeling so much because they’re so hormonal, and they’re experiencing so many things the first time, that’s even more compelling.”

When she’s not starring on TV, Maude can usually be found watching it. A self-confessed TV addict, her favorite genre is reality TV, something she explains away by saying it “gives (her) insight into people who have completely different lives than I do.”