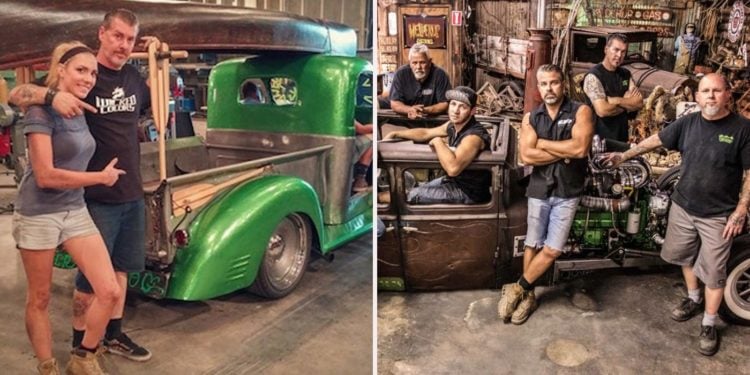 At first glance it might look like Vegas Rat Rods is a trip into another shop where older, broken-down vehicles are made into something that looks like a work of art and are made to run like absolute monsters. Well, that would be exactly what it is really, since the guys, and ladies, take in some of the ugliest and sometimes just some of the most beaten down pieces of junk and make them into something unique and completely awesome. The cars aren’t always beaten all to hell before they get them but by the time they’re done the vehicles that emerge from the garage are ready to seriously tear up some road and impress the living hell out of anyone that sees them. Some people might think it’s like a cross between the modern era and Mad Max, but first and foremost the things that are done in this shop are simply amazing and, despite not being to everyone’s taste, they’re impressive on a level bordering on absolutely crazy. It takes a real innovator however to take something and make it into a beautiful monstrosity that anyone might be proud to at least ride in.

And these people just the ones to do it.

Cheyenne’s run on the show is going to be short-lived as she came in during season three but will be leaving before season four. She’s been deep into the job for so long that it seems to be all she knows but she does know a lot more about it than many people. She was interested in automobiles at the age of 6 and ever lost that passion and drive for what she was doing.

Dan is the get-it-done guy in the shop. He’s also Steve’s mentor and the only issue he ever really has with Steve is whether the vision that Steve has can be made into a reality. There are just some things that are done in the shop that defy all laws of physics or at least try to and it’s usually up to Dan to make sure that they’ll be possible so that the build can go forward without a hitch, or too much of a problem down the line. If it can be made to fit then Dan will make it happen.

Even being the youngest guy on the team doesn’t hamper Justin that much since he’s able to bang with the rest of them and prove that he’s just as good. He’s a third-generation welder, which to some folks might not mean much, but to those in the know it means that he’s got a lot of experience and expectation to fall back on when it comes to his craft. Justin is the kind of guy you want on your team when it comes to really getting things done quick, fast, and in a hurry, but also in the most efficient and correct manner.

Travis is basically the artist of the bunch and whatever ideas Steve comes up with he has to find a way to bring up a set of plans that will make sense to the rest of the crew when it comes to assembling it and fabricating the parts. He’s been working on cars for a long time and has a lot of experience in design, which means that he’s thankfully able to keep up with Steve’s ideas in theory, but it only really comes together when he gets the plans going.

Grant has well over two decades of fabricating experience and is able to do just about anything when it comes down to the job. He’s a valuable member of the crew and while he’s not originally from the area he’s been able to prove his worth more than once when it comes to the type of work he can perform.

Dave is kind of the goofball of the bunch and is not a full-timer but he is seen at the shop quite often. He does a lot of upholstery and seems to be the one that really has to prove himself on a constant basis since he does the least amount of work around the place. He’s valued, but he’s kind of the odd man out sometimes.

Twiggy seemed like she might have been brought in for sex appeal just like Cheyenne, but in reality she’d signed up for an internship with Steve and had no idea what she was getting into. But the moment that she stepped onto the scene she was hooked, and she was ready to get stuff done.

The big dog, the boss, the reason why this place exists and why the show is even on the air. He’s the kind of guy that looks at an old and beaten down hunk of junk and doesn’t think of it as a lost cause, but a work of art in the making. Rat rods are, to him, a giant middle finger to anyone that says it can’t be done.

That seems fair, and a great way to look at it.