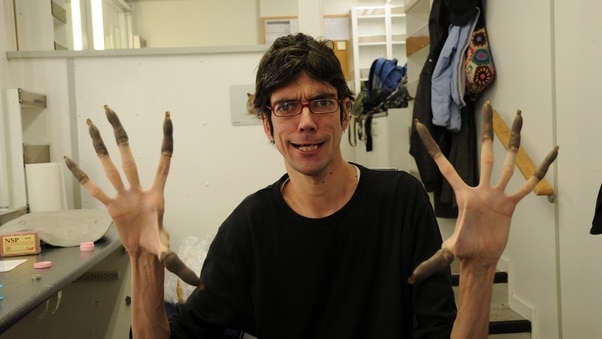 You might not know who Javier Botet is right off the bat, but if you’ve watched a horror movie with a tall, lanky character then the chances are good that you’ve seen him a time or two. He’s played the Slender Man character, Mama, the xenomorph in Alien: Covenant, and several others. The reason he’s so popular for so many roles is because he was born with the condition known as Marfan Syndrome, which speaking simply means that his arms, legs, fingers, and toes are disproportionately long and can likely unnerve a few people when they first meet him. In terms of making the guy a freak or even a little bit scary to look at there’s really nothing to say for it except that he looks pretty normal, he’s a healthy human being, and he’s pretty happy with his life. His appendages are insanely long, but this has worked to his advantage in a big way since it’s landed him more than one role in the movies and has kept him busy for quite a while apparently. This is one of those cases when looking at a person and making a snap judgment would likely be one of the worst possible ideas one could imagine, since yes, his extra-long limbs do look a bit odd. But at the same time when one looks at his proportions he carries himself pretty well and doesn’t have many problems with being able to just live a normal life.

Obviously his condition isn’t debilitating and has allowed him to become quite the popular face and name around a lot of movie sets since otherwise the monsters he plays might not look right and would have to resort to CGI instead of more practical means. Of course that doesn’t meant that he doesn’t get the CGI treatment since it’s likely that a lot of the practical effects are enhanced by this. But anyone thinking that he’s allowed his condition to get him down would be immediately wrong since he’s been loving life and staying quite busy throughout the years when it comes to the industry. Some might even go a bit further and think that it’s a bit wrong to focus on a person’s physical traits when casting them since it would mean that they might likely become typecast and even fit into a stereotype, but again, Javier is apparently having the time of his life. Likely as not he won’t be the lead character unless the monster or long-limbed individual in the movie is set to be the main character, but with the contributions he’s made thus far that hardly appears to matter. There’s nothing wrong really with taking an actor’s natural attributes and using them to great effect, especially if the actor in question doesn’t mind in the least.

Michael Berryman is another individual that has a rare condition that’s given him a distinctive look, and yet he’s made due with it since he’s been able to create some interesting and lasting characters in pop culture that a lot of people still remember to this day. This is another bit of proof that not everyone can be the glamour queen or the prince charming type since that’s not how nature works. Actors tend to do the best with what they have, and even the best-looking actors in the world can be some of the worst actors you’ve ever seen, meaning they rely heavily on their looks and nothing else. Javier is one of those that obviously loves what he does and focuses on getting the job done and moving on to the next gig, as this is the way to go and to be since focusing on anything else, especially what the narrow-minded individuals out there might say, is kind of ridiculous. It is kind of freaky to think that he played the role of the demonic spirit in Mama, since that movie was slightly terrifying and the creature was definitely something next level despite the fact that it didn’t do that well with the critics. Still, it’s possible that Javier had a good time with it since it took advantage of his lanky form and made good use of him on the set.

One thing about Javier is that he’s definitely kind of kid that would have exemplified the saying ‘he’s all arms and legs’ when he was still growing. One can only imagine what kind of efforts he had to make in order to gain the kind of balance and coordination he has today, as it’s difficult for those that don’t have his condition. But when your legs and arms are so much longer and you have to learn how to manage and manipulate them without fumbling around all the time, especially as a kid, that had to be a little bit challenging. As of now though he’s doing just fine, and doing what he enjoys no less.