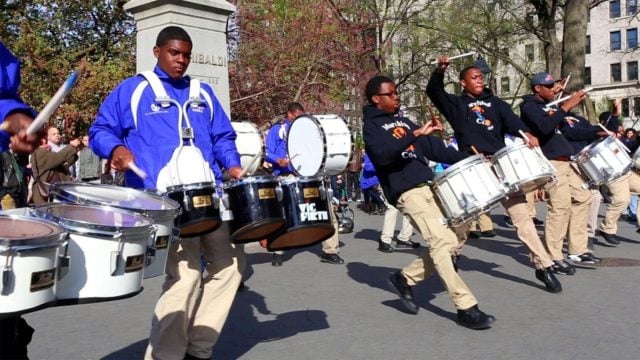 You can see the Marching Cobras Drumline in the movie Birdman. They’re an integral part of the scene were Michael Keaton runs through Times Square in his underwear because he’s managed to lock himself out of the theater. Keaton plays an actor who’s had better roles:

The Marching Cobras add their talents to the Times Square scene and continue the theme of “drums only” in the movie’s soundtrack. Drumming is primary, and a selection of classical pieces rounds out the rest. What better way to emphasize the vast Times Square, and the chaos that ensues, as Keaton is discovered running through it, nearly naked? We hear the Marching Cobras drumming before Keaton reaches the crowd. We see their flamboyant choreography as he runs past them. We hear their drumming sounds follow him as he escapes the scene. The Marching Cobras perfectly punctuate the moment.

The dark comedy’s unique soundtrack features the percussion improvisations of Antonio Sanchez to heighten the tension throughout the film. The Grammy winner created riffs and silences to react to the subtexts in the scenes. He followed director Alejandro Iñárritu’s cues and improvised as he watched the film. There are even two spots where a lone drummer is seen performing in the film. Nate Smith, Sanchez’s friend, played those scenes because Sanchez wasn’t available to do them.

The Birdman movie is not the only time the Marching Cobras have performed in NYC. They were at the halftime show at the Time Square New Year’s Eve Show put on by Planet Fitness:

What distinguishes the Marching Cobras program is the focus on social responsibility. The program accepts youth who have never drummed before, and teaches them to work with others. Goals include offering an alternative life style in the presence of gangs, escalating violence and school dropouts. Training includes transitioning into healthful eating and exercise as interventions for at-risk youth. The program exists to welcome and serve youth who are interested in participating in drumline and dance. The respect required for individuals and the group help to shape and mold the young performers and they begin to shine. Everyone willing to take on the rigorous training receives support from group leaders and a place in the program.
They’ve already worked with numerous US brands such as the NFL, Macy’s, Pepsi, Vogue, and many more. They’re a community-based drumline program, which makes their achievements all the more notable. They are a drumline on the move in a big way.

The drumline seeks to develop interpersonal skills, using drumming as the vehicle. Drummers are expected to be dedicated, disciplined, and excited. They take well-deserved pride in their Poison Percussion Session Program; teaching cooperation, negotiation, leadership and teamwork as they demand excellence.

Terrel J. Stowers is the founder and CEO of Cobra Performing Arts, Inc., the parent organization of all the arms of the Marching Cobras program. Kevin Young is the New York Program Director. Josef Keon Galloway and Keneya Peterson are Artists in Residence. These dedicated leaders have taken the Marching Cobras beyond the United States to performances in London and beyond.

The combination of dedicated staff and youth are propelling the program into positive spotlights wherever they perform. One drumline member said it best. For the Marching Cobras, “Drums is life.”

Marching Cobras Turn It Up in Yonkers

Judy Greenlees is the co-author of a decidedly different romance novel, Cherished to the Utmost. She’s also written several short stories, a few zombie apocalypse adventures, and the prologue for 8 Women of God. Judy has written for the Internet since 2007, focusing on the arts, culture, and science fiction. Her more than 34 years as a fine arts professional has included founding Artistic Journeys, a non-profit, arts educational organization in Southern California. She has taught music, art, and English, and performed as a piano accompanist on many stages in different venues. Her favorite was the Royal College of Music, London. Judy’s formal education began when she was a public-school student in Hashimoto, Japan. Her B.A. in Music History from CSU Fullerton was followed over 20 years later with an MBA from NYIT. She currently lives in a lovely small town in New England near her daughter, son and daughter-in-law.