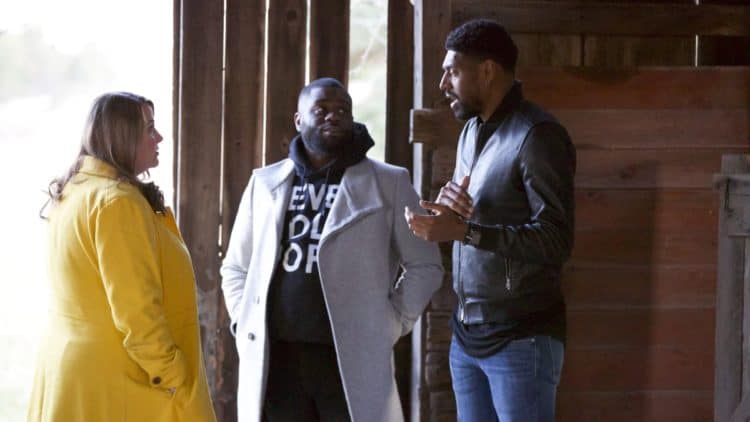 Friday, August 16 saw the return of our favorite group of ghost hunters, Dalen Spratt, Juwan Mass and Marcus Harvey, collectively known as the Ghost Brothers. The group have been working together for years, having initially bonded over the supernatural experiences they encountered as a child. Their first turn on TV came in 2016, when they were commissioned by Destination America (a subsidiary of Discovery Communications) to star in a brand-new series all about the paranormal. The result was Ghost Brothers, a program that saw Spratt, Mass and Harvey travel all around the US, investigating any sites were ghostly sightings had been reported. After the success of the first season, a second was commissioned by TLC, airing been March 10 and May 12, 2017. With catchphrases like ‘It’s time to pop the trunk on these ghosts!”, “Let’s go ghosting!”, and “Ghost Brothers, ghosting out’, we couldn’t help but fall a little in love with the charismatic trio… so the news they’d be returning in a brand new spin-off, Ghost Brothers: Haunted Houseguests came as a welcome surprise. The series, which premiered on August 16 and will run over eight episodes, promises to go even deeper into the world of the paranormal. This time around, the Brothers will spend an entire weekend with the residents of America’s most haunted houses, giving their homes a thorough cleaning with their very special brand of spiritual healing. And we (and the network) couldn’t be more excited… “Dalen, Juwan and Marcus have such a fresh take on paranormal investigation with their larger-than-life personalities fueled by their passion to help people,” Matthew Butler, general manager of Travel Channel, shared with The Wrap. “We’re thrilled to bring the Ghost Brothers to Travel Channel in this new Haunted Houseguests format, which allows them to really connect with families in need.”

The ringleader of the group is Dalen Sprat, a fashion designer and entrepreneur from West Texas who, as Yahoo notes, has his “finger on the pulse of the who, what, where, when and why of each case”. Sprat’s first experience of the supernatural came as a child, when he awoke to find an apparition of the man whose funeral he had just that attended standing over him. He’s been chasing further evidence of the supernatural ever since and is convinced the spirit world is real as this one. Spratt met the other members of the team back in 2004 or 2005 (he’s a little less clear on dates than he is on the existence of ghostly goings on). Spratt is proud of the achievements of the group, and feels they’ve helped break the ceiling in an industry that had previously only entertained the idea of white ghost hunters. “We’re kind of like the Jackie Robinson of ghost hunting, and we wear that title with pride,” he told Monsters and Critics. “And yeah, I feel like we should get a day in Black History Month.” If his mother can be relied on, he just might. Spratt’s mother is a pastor, and always puts in a little word for her son and his crew before each investigation. Maybe she could say a little prayer at the same time for a day in their honor…

According to his official bio on the Travel Channel, Juwan Mass (who’s lived long enough in Atlanta, Houston, and Tennessee to claim all three as his home) has a huge heart and a desire to help people that occasionally has him jumping into some pretty crazy situations. The former Eagle Scout has been hunting down the paranormal since he was just 12 years old, but it’s not always the barrel of laughs it seems on camera. The scariest experience he’s ever had came during an investigation at a former Masonic lodge turned funeral home turned home of a Satanic leader. Even if you give short shrift to the idea of ghosts, that kind of killer combination is guaranteed to raise the hairs on the back of your neck, regardless. ‘That’s probably one of the scariest places I’ve ever been in my life. As soon as you step into it, you feel dread, grief,’ he told Monsters and Critics. When he’s not hunting down ghosts, Juwan runs the fashion label Loren Spratt alongside fellow Ghost Brother, Dalen Spratt. The label was born out of the difficulty the pair had in finding wardrobe essentials they actually liked. Over the years, the brand has grown exponentially, and now keeps everyone from grooms to business people to celebrity clients suited and booted to perfection.

Completing the lineup of the Ghost Brothers is barbershop entrepreneur and ghost hunter extraordinaire, Marcus Harvey. Known as the joker of the Ghost Brothers, you can expect to hear a lot more of Harvey’s trademark humor over the coming season. While he’s always loved a gag, Harvey has found it’s helped serve a more serious purpose over the past few years of ghost hunting. “You want to kind of break the ice a lot of times,“ he’s said. “And what better way to break the ice than just, more so just cracking a joke on a dead person. Or a live person, you know. Dead or alive, they can get these jokes.” When he’s not cracking jokes or hunting down ghosts, Harvey is heading up the hugely successful barber shop, BarberStar Enterprise LLC, which has served everyone from Nas to Chris Webber, Grant Hill to Isaiah Thomas, Cedric The Entertainer to Mike Epps, and Stephen Curry, to Ron Reaco Lee. BarberStar has proved such as a runaway hit with celebs and non-celebs alike that Harvey already has plans to extend his empire further, starting with the opening of 2 further barbershops next year. Fortunately, he’s still as dedicated to the Ghost Brothers as ever, so won’t be letting his business activities come in the way of his ghost hunting ways.