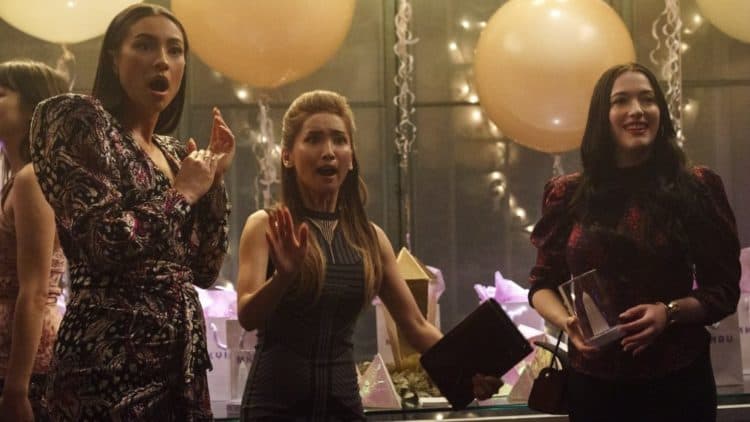 Dollface is the latest addition to Hulu’s ever-growing comedy arsenal. The series follows Jules (Kat Denning), a 30 something woman who’s been left heartbroken after being dumped by her boyfriend. Having focused so long on her other-half, Jules must now “deal with her own imagination in order to literally and metaphorically re-enter the world of women, and rekindle the female friendships she left behind”… or so goes the show’s official synopsis. Having themselves been “dumped’ by Jules at the start of her relationship, her old friendship group are at first hesitant to accept her back into the fold with open arms. Ultimately, friendship wins through, making the show, at heart, a celebration of the kind of all-conquering, all-girl friendship group Taylor Swift has been championing for years.

Kat Dennings takes the starring role of Jules. The 33-year-old actress began her career at the age of 10, appearing in numerous TV and print commercials (with the first being a TV ad for potato crisps). Her first acting gig came in 2000 with an appearance on Sex and the City. From there, she stared for a year on the WB sitcom Raising Dad, before making various guest appearances on the likes of The Scream Team (2002), Without a Trace (2003), Less than Perfect (2003), and CSI: Crime Scene Investigation (2004). Her film debut came in Hilary Duff’s Raise Your Voice in 2004; from there, she quickly began lining up parts in features such as Down in the Valley (2005), The 40-Year-Old Virgin (2005), London (2005), Big Momma’s House 2 (2006), Charlie Bartlett (2007), and Nick and Norah’s Infinite Playlist (2008). After several years of concentrating largely on her film career, Dennings returned to TV with a bang in 2011 when she was cast in the CBS sitcom, 2 Broke Girls. While her on-screen chemistry with costar Beth Behrs was roundly applauded, the series suffered ongoing criticism for its over-reliance on sexualized humor and stereotypes. It was eventually canceled in 2017 after six seasons. Since then, Dennings has been busy with projects such as the animated sitcom Big Mouth and Dallas & Robo. Offscreen, the actress is nothing if not a paragon of virtue, keeping her mind primed with transcendental meditations, and her body healthy with abstinence- something she revealed during an interview with BlackBook in 2017. “I don’t drink and I don’t smoke”, she said, before adding “and I don’t like being around people who do”.

In April 2019, it was announced that Shay Michell, who at that point was best known as Emily Fields on Pretty Little Liars, would be replacing Lex Scott Davis (who’d previously been lined up for the role) as the free-spirited hedonist, Stella. Her addition to the lineup was warmly greeted by the rest of the cast, with both Kat Dennings and Brenda Song taking to social media to welcome her into the mix. The gig may constitute Mitchell’s first major role in a comedy series, but she’s far from a stranger to our screens. For seven seasons, the actress played a pivotal role in the hugely popular ABC Family/Freeform series Pretty Little Liars. After her departure in 2017, she starred as Peach Salinger in Lifetime’s stalker thriller You, and in the 2018 horror flick, The Possession of Hannah Grace. Off screen, Mitchell recently became a mother for the first time with the birth of her baby daughter in October. She revealed the happy news of the birth on Instagram, with a heartwarming photo of her holding her daughter’s hand and the caption “Never letting go”.

Brenda Song began her career as a child model before graduating to TV with roles in shows such as Fudge (1995) and 100 Deeds for Eddie McDowd (1999). In 2001, she won a Best Performance in a TV Movie (Comedy), Supporting Young Actress trophy at the Young Artists Awards. That same year, she signed a lucrative contract with Disney, subsequently appearing in a number of productions for the channel, including Stuck in the Suburbs (2004), and Wendy Wu: Homecoming Warrior (2006). In 2005, the actress landed the lead role of London Tipton in The Suite Life of Zack & Cody, a character she would later revisit in The Suite Life on Deck. In 2009, she began to transition away from Disney into more grown up territory. Her breakthrough came in 2010 when she starred alongside Jesse Eisenberg, Andrew Garfield and Justin Timberlake in Columbia Pictures’ The Social Network. Since then, she’s appeared in numerous notable TV shows and films, including Scandal (2012-13), Dads (2013-2014), Pure Genius (2016-17), Station 19 (2018), and Amphibia (2019-present).

After graduating from the University of Illinois at Urbana—Champaign, Esther Povinsky moved to LA with the dream of pursuing a career in stand up comedy. After honing her comedic talents at iO Chicago, The Second City, and The Groundlings, she began developing her reputation on the LA comedy circuit, regularly drawing the crowds at venues such as The Comedy Store, The Ice House, and The Improv. In 2011, she landed her first TV acting role on New Girl; her first major part came 5 years later with the recurring role of Maya in Crazy Ex-Girlfriend. Other TV credits include Alone Together (2018), The Story Of Our Times (2018), and Dude (2018).