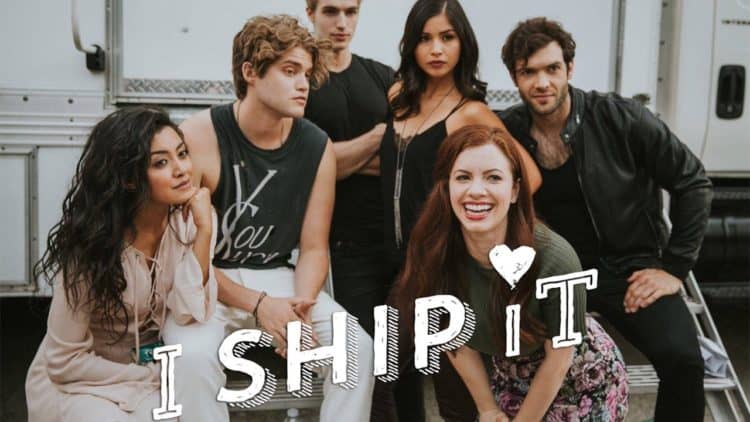 In 2016, CW Seed broadcast an 8 minute per episode scripted web series based on Yulin Kuang’s short, I Ship It. In it, we met Ella, Tim, Shira and Sasha for the first time. Ella and Tim worked at a website overseen by Shira. After breaking up with her boyfriend, Ella and Tim began a band, eventually falling in love. Fast forward to 2019, and we’re now on season 2 of the TV version of the increasingly popular series. While the premise of the TV show remains roughly the same as the web series, there’s a couple of key differences. Ella and Tim have been transplanted to a shipping company called I Ship it, where both harbor dreams of a better life. After a fortuitous series of events brings Ella the opportunity to work at Supernatural, the TV show she’s been obsessed with for years, she quits her job at I Ship It for a new life as a writer’s assistant. With a likable cast of characters, fun storylines and some great tunes, the show is proving popular among fans looking for a little light relief.

Taking on the lead role of Ella is Helen Highfield. Prior to her casting in I Ship it, Helen had made a fleeting appearance on an episode of Criminal Minds in 2011, and an equally brief appearance as a TSA Agent on Cooper Barrett’s Guide to Surviving Life. Her credits also include the web series Waking Up With Strangers, Short Plays about The One, Deck the Hall Two, and the Indie feature, The Manhattan Front. She’s recently extended her creative output behind the camera by producing the short film, Diva, written by Maggie Levin. Discussing her casting in I Ship It with Cliché, Helen revealed she was instantly drawing to the character of Ella after sensing a lot of commonality. “There is definitely a lot of me in Ella,” she revealed. “We are both ambitious and can get kind of intense when we’re going after something we want. I think Ella is a lot more impulsive than I am. I think that’s part of what I loved about playing her”.

Starring as Ella’s boyfriend Tim is actor Riley Neldam. Previous to I Ship it, Neldam had made appearances in several stage productions, and featured as a guest star on series such as The Catch and Criminal Minds. After graduating from Bellevue High School in 2007, Neldam studied classical acting at the London Academy of Music and Dramatic Art. Neldham is currently planning on returning to the school at the end of September 2019 to obtain his Master of Fine Arts degree… although a lot rides on whether his Go Fund Me Campaign will pull in the necessary funds in time.

Tackling the character of Sasha is the Emirati-American actress, Yasmine Al-Bustami. After graduating with a degree in finance, Yasmine made the move into acting, and has since appeared in the likes of The Originals, where she played the recurring role of Monique Deveraux, Film School Shorts (2014), Nashville (2014), The Inspectors (2016), and Orbital Redux (2018). I Ship It is the 2nd web series Yasmine has been involved with, having previously appeared in the series Nessyane.

Playing Tim and Ella’s tyrant boss Shira is the actress Kristen Rozanski. Rozanski has previously appeared in several episodes of Law and Order (albeit as two different characters- Kim in the original series and Lisa Deering in Law and Order: SUV). Other credits include Adam Ruins Everything (2015), and The UCB Show (2016).

The part of Kayla is played by Marissa Cuevas, a 26-year-old actress from New Orleans, Louisiana. Past credits include a recurring role on the Nickelodeon series Supah Ninjas, and guest appearances on the Disney XD shows Kickin’ It and Lab Rats.

Appearing as Saxon is Ethan Peck, an actor who’s been active in the industry since the age of nine. List of accomplishments include winning the award for “Best Actor” at the 2009 Sonoma International Film Festival, being asked to represent the fashion brand Salvatore Ferragamo as a spokesperson, acting as the voice and CG model for Gabriel Thorne on the video game Halo 4, being Mary-Kate Olsen’s first on-screen kiss in the 1999 movie Passport to Paris, and, perhaps most impressively of all, being the grandson of actor Gregory Peck.

51-year-old Canadian actress Gita Reddy takes on the role of Marina. After studying for her Bachelor of Arts degree in Visual Arts (Media) at the University of California at San Diego, Gita earned her Master of Arts degree in Cinema Studies from the Tisch School of the Arts at New York University. Since then, she’s built up an impressive list of TV and film credits that includes roles in The Bourne Legacy, Ben and Kate, Criminal Minds, Hot in Cleveland, Betas, Mike & Molly, House of Lies, The Mindy Project, Rizzoli & Isles, Life in Pieces, Orange Is the New Black, Silicon Valley and Marvel’s Iron Fist. She’s also appeared extensively on stage, including in the Olivier award winning production of Rafta, Rafta at the Old Globe in San Diego. According to her official website, she’s next set to appear alongside Tony Hale in the feature film, Eat Wheaties!

British actor David Witts tackles the character of Luke. Best known in the UK as Joey Branning in the long running soap opera, EastEnders (for which he won the ‘Most Popular Newcomer’ at the National Television Awards in 2013), David won his first big break in the US as Craig on the TV series, Recovery Road. In May 2018, David made his West End debut in the smash hit musical, Wicked, and in March 2019, returned to UK TV in the BBC soap opera, Doctors.