Home
TV News
Meet the Cast of the Show “Happy Together” 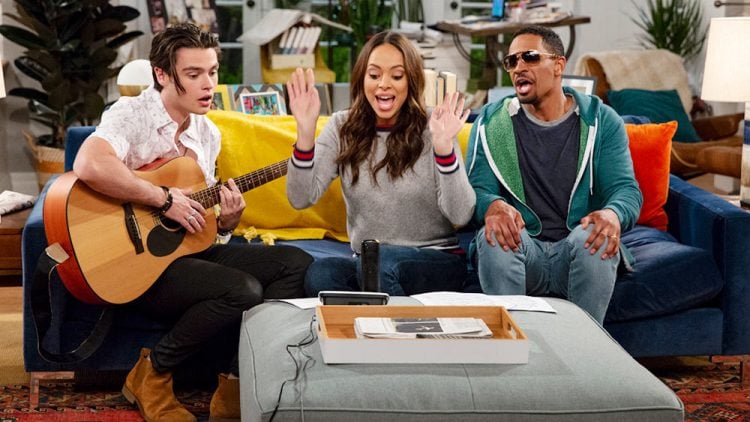 The CBS television sitcom “Happy Together” is the creation of Austen Earl and Tim McAuliffe. The show made it’s premiere on October 1 of 2018. If you haven’t been able to keep up with every episode of the show, the lineup of stars is amazing. “Happy Together” is a hilarious comedy show that will keep you in stitches. Just in its first season it’s time that you met the cast.

The premise of the show

The show follows a couple in their thirties named Jake and Claire.” These two have grown tired of their life because it’s turned into a mundane existence. They live a normal suburban life until an emerging pop star moves in and helps them to connect with their younger selves back in the day when they were a lot “cooler.” The main characters of this series are Jake Davis, his wife Claire, Cooper James, Bonnie, Gerald, and Wayne. We’ve included a brief line or two about who they are and how they contribute to the show. It’s just enough information for you to want to find out all about the show for yourself.Â  Here’s the entire cast:

Damon Wayans, Jr. stars in the lead of the show. The name of his character is Jake Davis. Jake in an accountant who works in the entertainment industry. His wife is Claire Davis. She is a designer who works with bars and restaurants. Cooper James is his client.

Amber plays the part of Claire Davis, Jake’s wife. Both of her parents are retired doctors.

Stephnie plays the part of Bonnie in the show. She is Claire’s mother as well as being a retired doctor.

Victor Williams plays the role of Gerald, who like Bonnie, is a retired doctor and he is also Clair’s father.

Chris Parnell is a talent manager named Wayne. He works for Cooper and he is also a colleague of Jake.

Felix Mallard plays the role of an up and coming pop star by the name of Cooper James. He is a client of Jake Davis. This is the character that helps to make the lives of both Jake and Claire a bit chaotic but also a little more interesting.

These are some of the guest actors and actresses who either appeared in the pilot of the show or who make cameos or recurring appearances.

These are the cast of the new series who seem to have a magical chemistry on the set. So far, the show is getting good reviews and it’s a great way to take a break from reality and to enjoy some amazingly funny entertainment. Now that you’ve had a light introduction to the cast of the show “Happy Together,” and you have an idea of the main premise, the best way to really get acquainted with the characters is to tune in for yourself. You can catch reruns of the entire series to bring you up to speed on what happened so far in Season one of the new hit comedy series. We’d love to tell you about it all right here, but it’s a lot more fun to find out for yourself.