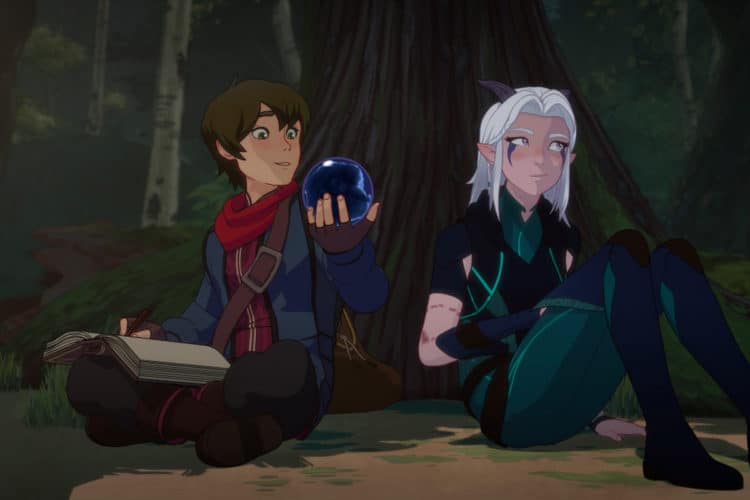 The third season of the computer-animated show The Dragon Prince has just begun to air on Netflix. The series was created by Justin Richmond and Aaron Ehasz and is a Netflix original. The show is set on the continent of Xadia and is based around a war that is brewing between dragons and elves, and humans. The main characters in the show are all teenagers, but this does not mean that it is only a young audience that can enjoy this show. The voices of the main characters will be very familiar to fans of the show, but they may not know much about the actors behind these voices. All the information you about the voice actors in The Dragon Prince need can be found below.

Paula Burrows won the role of Rayla when she had only been auditioning for voice roles for a few weeks. Before this most of her experience was in live action roles, which included both TV and film. She sent in her audition for the role of Rayle via an mp3 file which was sent by email. She did not hear anything for a few weeks and started to think she was unsuccessful before she got the call to say she had the part. This is the first animation series that she has worked on and although it has been a learning curve she has enjoyed every minute. She voices a number of other characters in the show as well as Rayla.

Jack De Sena explained to Animation Scoop that he had previously worked with Aaron Ehasz on Avatar: The Last Airbender. The role of Callum was not written with him in mind, but he was the first person the producers thought of for the role and he did not have to go through a formal audition process. He was the most experienced of the main cast when it comes to voice work. He received particular praise for the work that he did as Sokka in Avatar and as Jimmy Olsen in The Batman.

Sasha Rojen is only thirteen years old and she has been acting since she was six. The Dragon Prince is her first experience of voice work. Despite the fact that most of the main characters on the show are teenagers, she is one of the only actors on the show that is voicing a character that is their own age. Before The Dragon Prince she has worked on popular TV shows such as Bates Motel, The Flash and Supergirl. She lives in Vancouver with her family and this is where the show is recorded.

Jason Simpson is a Canadian actor who has been in the business for almost twenty years. He has also provided voices for several video games. He has worked on several high profile movies including My Little Pony and Sausage Party. In terms of live action roles, he has had guest roles in many popular TV shows including Riverdale, Arrow and Once Upon A Time. He is another actor that voices more than one character in the show.

Racquel Belmonte is an actress that is predominantly known for her voice work. She has also provided voices for two shows in the Lego franchise – Legends of Chima and Elves. She played the role of Chelsea in the film Heart. She is also known for her work as a sketch comedian. She performs comedy shows as a solo act but she is also involved in a number of other projects. She is part of a duo named Carmelahhh and also performs with a female comedy troupe named Nasty Women.

Jesse Inocalla is a Canadian actor and voice over artist. He became interested in acting when his father got the part of Michaelangelo in Teenage Mutant Ninja Turtles 3. He states on his website that spending time with his father while he worked on this movie was all he needed to decide he also wanted to be an actor. Before he worked on The Dragon Prince he had acted in a number of other voice roles. He has also had the lead role in live action TV shows including Valley Of The Rats and The Burning Times.

Luc Roderique has wanted to be an actor from a young age and he started his career working in theaters. He has spent a lot of time working for the Canandian theater company Bard on the Beach, and had the title role in their production of Othello. This is only the second voice role that he has had, the first being the voice of Doctor Octopus in the mini-series Marvel Super Hero Adventures. He has had parts in major movies such as Godzilla as well as main roles in the TV shows The Crossing and Siren.

Jonathan Holmes was born in Shrewsbury, England before moving to Canada where he is now based. He has worked extensively as a voice artist but he will be probably be most recognizable for his role as William Barry in Netflix’s Anne With An E. He has provided the voice for characters in a number of animated shows including Dragon Booster and Galaxy Angel. He also played a giant in Stephen Spielberg’s movie adaptation of the BFG.

Eric Todd Dellums is best known for his role as Doc Frazier in the HBO series The Wire. He played another doctor in an episode of Homeland. His role in The Dragon Prince is one of the first voice roles he has had on TV, although he has provided voices for characters in video games. He has also narrated several documentaries and so his voice will seem familiar to many. Away from acting he has a popular blog where he writes about social and political issues.