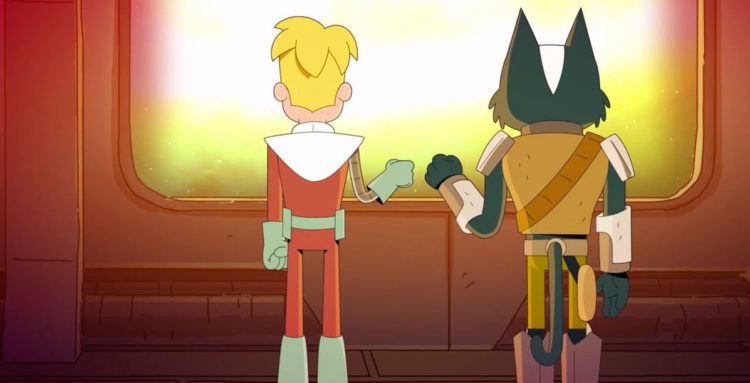 If you’re not already watching Final Space, then you’re not only missing an outstanding animated series, but also one of The most epic cast lists we’ve ever seen. We don’t use that word lightly (Epic), but in this case, it applies. Gina Torres, Ron Perlman, and David Tennant, among others, all Voice characters on this hilarious, overdramatic, and well-written space story. The search for The end of The universe is something you don’t see every day, but Final Space is tackling The (almost) unthinkable. We can’t imagine how they managed to get all The incredible voices together, but we’re thrilled they did. It’s a long and outstanding list, but we want you to meet the voices behind Adult Swims “Final Space.”

Olan is a fantastic comedian who started his career as a YouTube personality. Along with friends, from high school and college, he formed Balloon Shop, a comedy trio. He’s best known for his work as a Voice actor and Youtube personality, and he voices Gary Godspeed, The lead character in Final Space.

Caleb is instantly recognizable as Lucas Sinclair from The incredibly popular Netflix show Stranger Things. However, he also has an outstanding singing voice. He’s been on Broadway as Young Simba. That’s a pretty big accomplishment for such a young actor.

Voices: Avocato, a Tera Con Officer, Viro, and other voices

As a YouTube sensation, The handsome and charismatic Coty Galloway had millions of viewers. We enjoyed him tremendously as Avocato The cat-person on Final Space’s first season.

From 2002 until 2013, Fred was a member of Saturday Night Live. He’s also been in films such as Anchorman and EuroTrip. However, this talented actor also writes, produces and makes music among his many talents. He voices The annoying robot KVN (Aka Kevin) who travels with Gary.

If this name sounds familiar it’s because you’ve certainly heard him before. Tom Kenny is best known as Sponge Bob Square Pants. He’s been in numerous shows, films, and even video games as The beloved, hard-working, pineapple dwelling, sponge. He’s also voiced Spyro The Dragon and other famous cartoon and video game characters.

Most people would recognize Tika from her five years as Layla Williamson in The ABC daytime soap opera, One Life to Live. However, this gorgeous actress began as a model before moving on to The reality TV series Best Friend’s Date. Since then she’s been working in TV and films.

John is someone you might not instantly recognize, at least not by his face. That’s because he’s been Voice acting for a long time. You’ve heard his work as Bender on Futurama, Jake The Dog on Adventure Time, King Zog on Disenchantment, and too many others to mention, like Transformers Age f Ultron and Rick and Morty. His deep Voice and talent for creating vocally distinct characters rival Peter Cullen or Jim Cummings among The legends of Voice work.

We can’t say enough good things about Gina Torres. We adored her as The snarky, curt, and utterly B.A. second in command on Firefly/Serenity. Lately, we’ve been watching her as Jessica Pearson in Suits, but everything she’s been a part of has been exceptional. Indeed, The casting director on Final Space managed to convince so many outstanding actors and actresses to join The cast we have to wonder whether Jeff Bezos was funding The budget.

We adore this Korean born actor. Like most fans, we first came to know Steven Yeun on AMC’s zombie drama, The Walking Dead, where he played Glenn, The heart of The main cast of savvy survivors. Sadly, all great things must come to an end. We’ll never forget that Death scene. Glenn may be gone, but luckily we still have Steven around.

Ron Perlman needs no introduction. You know him as Hellboy or The Leader of The Sons of Anarchy. If you grew up in The 80s and early 90s, then you watched him as Vincent on The TV show Beauty and The Beast. The list goes on for days. One thing is for sure. If a show or movie has Ron Pearlman on The credits, it’s worth watching.

If you have to ask who David Tennant is than you haven’t been watching Dr. Who. For that matter, you managed to miss him in Fright Night, Good Omens, Jessica Jones, and a laundry list of outstanding roles as long as our arms. While he’s arguably best known as The Tenth Doctor, that’s a very limited view of the incredible talent that is David.

As one of The newer actresses on Final Space, we have to give Shannon Purser credit. It’s got to be a Little difficult to walk among stars with such storied careers as a relative newcomer. However, her presence on The show is enough to tell you how talented she really is. You probably caught her as Ethel on Riverside or playing Barb Holland on Stranger Things. Regardless, we look forward to hearing a whole lot more from this incredibly talented redhead.

There are so many genuinely exceptional Voice actors on this show. Here are The rest of The cast members thus far:

We could binge watch Final Space a dozen times and never get over how incredible The lineup of characters and actors are. Of all the shows on Adult Swim right now, this is by far our favorite. Were you surprised by any of the voices? Let us know in the comments section below.

Warner Bros. Is Using AI To Help Decide Which Movies to Make