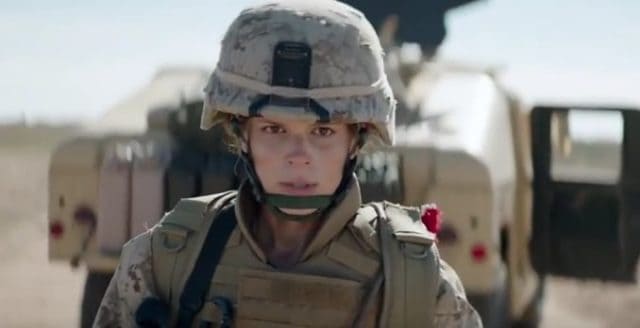 There are thousands upon thousands of pictures of military dogs posted on the internet each day.Â  There are also an equal amount of videos posted that show members of the military coming home to greet their dogs or those being reunited with their dogs.Â Â  While we understand that dogs are an important part of our military and law enforcement, we generally see these pictures, give them a “like” or some kind of emoji, and go on with our days.

However, we rarely take the time to read or understand what some of these dogs go through as well as the relationships they forge with their human partners.Â  A new movie called Megan Leavey will be taking a look at a real life story of such a relationship.Â Â  Megan Leavey, a U.S. Marine who was injured while on patrol in Iraq with her dog Rex, is awarded the Purple Heart. Years later, she fights through bureaucratic red tape to adopt Rex and and reunite with him when he is retired from duty. The film stars Kate Mara, Edie Falco, Common, RamÃ³n RodrÃ­guez, and Tom Felton.

From the looks of the trailer. it seems that Mara puts in a solid performance and you have to love Common playing her superior in this film.Â Â  This is going to be a great film for dog lovers.Â  Check out the trailer below: