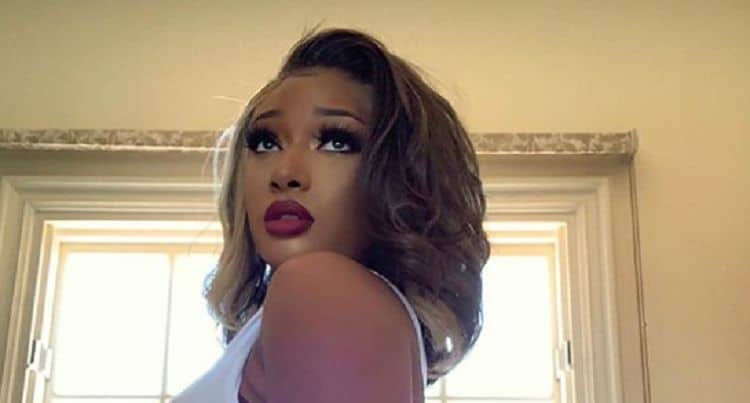 American rapper Megan Thee Stallion (or the rather more ordinary Megan Pete, to call her by her birth name) made history in November 2018 when she became the first female rapper to sign to record label, 300 Entertainment. Her first release with the label on May 17, 2019 (the aptly titled Fever), marked her as one of the hottest new talents to arrive on the scene in years. Despite still being a student, Megan is making big waves in the industry, throwing shade on her male counterparts and proving female rappers have just as much to say as men. To learn more about the up and coming star, keep reading.

1. Her mother was a rapper

Given her family background, any career outside of music would have been an odd choice. Megan, who was born and raised in Houston, Texas, got her first taste of the industry at a young age. Her mother, Holly Thomas (known professionally as Holly-wood), made her money as a rapper. Rather than leaving Megan with a childminder, Thomas would take her young daughter along to the studio to sit in on her recording sessions. Given her early exposure to the genre, it was little wonder that when it came time to make her own money, Megan decided to follow in her mother’s footsteps and carve out a career in entertainment.

If you want to succeed in any industry, the earlier you begin honing your craft the better. Megan clearly understood the dedication needed to make it big in music, as at 14, she was already writing and performing her own raps. Fortunately, she had her mother on hand to give her some useful hints and tips. Although Thomas was initially taken aback by the sexually explicit nature of her daughters’ lyrics, she saw how serious her daughter was in pursuing a career in rap and started to manage her when she entered college.

Megan’s time isn’t wholly devoted to music; on her mother’s insistence that she finish her education, Megan is currently enrolled as a third-year student of health administration at Texas Southern University. Asked by Vulture how she’s handling juggling the demands of her blossoming music career with the stresses of studies, Megan answered “College is really stressing me out right now. I had to take all online classes this semester because I figured out last semester I’m gonna be so booked. So I’m gonna have to figure out how I can convince my teachers to give me my work ahead of time or cut me some slack if I’m not at school because I’m off being a rapper”.

4. She owes her breakthrough to social media

In 2013, a clip of Megan duking it out at a male-dominated cypher went viral. Within weeks of the battle hitting the internet, Megan’s social media following had more than doubled. Since then, she’s learned to capitalize on the pulling power of digital platforms by keeping her fans (known as “hotties”) fed with a regular supply of Megan-centric updates and flooding Instagram with posts of her freestyles.

In 2016, Megan unleashed her first mixtape, Rich Ratchet, along with her first single, Like a Stallion. In 2017, she followed up on her initial success with her first EP, Make it Hot. The album blew up: within a few weeks of its release, its accompanying single Last Week in H TX, had managed to pull in over four million views on Youtube.

Megan Thee Stallion might sound an unusual choice of stage name, but apparently, it’s less a comment on her love for all things equestrian and more a reflection of the South’s penchant for comparing young girls to animals. In the same interview with Vulture, Megan revealed that “stallion” refers to girls who are particularly tall and “fine”. She herself earned the title when she was 15 years old. “I’m like 15 years old and this older dude is like, “Damn, you a stallion,” she shared. “I’m like, “Stop talking to me before you go to jail.” And he’s like, “How old are you?” I’m like, “I’m 15!” So it could’ve been Megan Thee Jailbait, but Megan Thee Stallion just works.”

7. Pimp C and Biggie are her key influences

Although she’s at the forefront of a new wave of talent drawing on modern techniques to create a contemporary style of sound, Megan is as equally inclined to draw inspiration from the icons of old-school hip-hop as she is to be inspired by modern-day artists. “I was definitely listening to Pimp C, and I was listening to Biggie–those are my favorite rappers, so my mom really put me on a lot of good music,” she told Houstonia.

In 2019, Megan made her big breakthrough with the single Big Ole Freak. The crossover appeal of the single generated enough mainstream interest to give Megan her first chart entry, with the single scrapping into the Billboard Hot 100 at number 99. It also managed to rack up 6 million Youtube views, and more than justify Billboard’s decision to include her on their “artists to watch” list for 2019.

9. Her alter ego is Tina Snow

If the name Megan Thee Stallion is too much, you could always call Megan by the much simpler Tina Snow. The name refers to her alter ego, and is influenced by Pimp C’s alter ego, Tony Snow. Megan also sometimes goes by the name “Hot Girl Meg”, who, in contrast to the sexually dominant Tina Snow, is a “carefree, college party girl”.

In March 2019, Megan made the sad announcement her mother had died of a brain tumor. Megan had suggested in earlier interviews that her mother had stepped down as her manager due to illness, but until that point hadn’t revealed the extent or seriousness of the condition. Megan chose to share the news on Instagram, posting a throwback picture of her and her mom along with the heartfelt message “The best mom in the whole world. The strongest woman on the planet. I can’t even put complete sentences together rn RIP mama.”